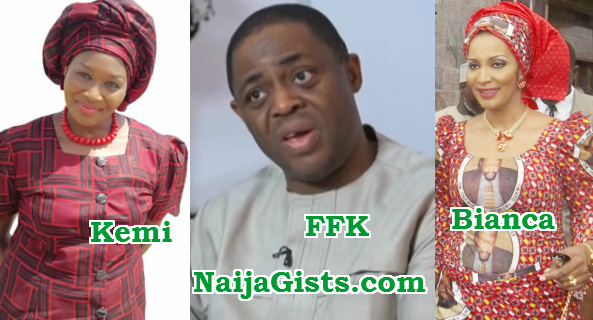 Bianca Ojukwu has finally replied all the allegations controversial Social Media Personality Kemi Olunloyo made against her.

In a recent interview with Jola Sotubo, Olunloyo alleged that Bianca Ojukwu aborted twice for ex-Aviation Minister Femi Fani Kayode while she was still married to Ojukwu.

“The attention of Her Excellency has been drawn to an interview granted by a media character Ms Kemi Olunloyo, a deportee from Canada, and a fugitive from justice in the United States of America, whose sole existence centres around online character assassination.

“Her victims have ranged from Bishops, General Overseers,Presidents, Ministers, Hardworking Musicians and real media Personalities down to her own family members including her mother, father, stepmother and siblings.

“It is rather unfortunate that it has become the practice for anyone seeking publicity to add Her Excellency’s name to their stories, fantasies or delusions, and none more so than this mentally unstable internet troll whose insane need for attention is well known to Nigerians.

“This unhealthy obsession with Her Excellency for some time now, a situation most public figures can identify with, has been glaringly evident in her posts, and is indicative of a more serious underlying condition.

“It is quite clear that her delusions and fantasies have become her reality, and her lack of gainful employment and hours spent online focusing on other people’s lives have exacerbated her already strained sanity or lack thereof.

“It is obvious that Ms Olunloyo needs urgent psychiatric attention. Her Excellency extends her sincere sympathies to Ms. Olunloyo’s family, and urges those who are able, to ensure that this mentally challenged individual receives the crucial psychiatric help she is so desperately in need of in order to contain her excesses.”

About 3 years ago, Fani Kayode confirmed in an interview that she dated Bianca but the wife of the ex-Biafran activist denied the claim and threatened to sue him for defamation of character.