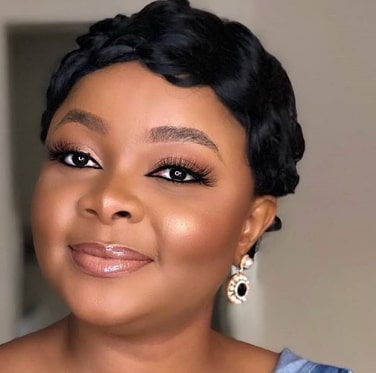 Versatile Nollywood actress Bimbo Ademoye is unarguable one of the best among her peers.

In this chat with The Beats, the Covenant University graduate talks about her upbringing and acting skill.

From playing the role of a housemaid to that of a sophisticated city damsel, Ademoye’s acting prowess isn’t in doubt. Explaining what has been responsible for her ability to play diverse roles, she said;

“I grew up in the heart of Ebute Meta so any role you see me will be the character of someone that I grew up with.

Addressing the notion that she has risen fast in Nollywood, Ademoye said;

“I wouldn’t really say I have risen or say it’s a fast rise. I am the only one who knows my journey. God has helped me so far. We have people who have done a lot of movies and they still haven’t got to where I am.

“I am not trying to make fun of anybody, I am just being grateful to God. My special thanks go to Uduak Isong and Biodun Stephen for always pushing me. Sometimes it feels like I can’t play some roles. I didn’t know I would be able to play my role in ‘Baami’. Biodun Stephen persuaded me to give it my best.”

On how she copes with the attention that comes with being in the limelight, she said;

“My dad’s advice keeps ringing in my head. I do not get carried away by the attention.”

Chiwetalu Agu Praises Okocha, Reveals Why He Dropped Football Ambition
Charles Awurum: I Met My Wife In A Dramatic Way