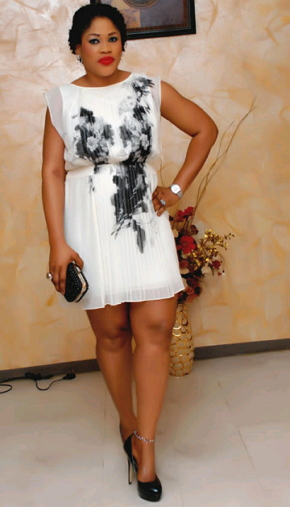 Yoruba actress Bisi Ibidapo Obe who got involved in a bitter media fight with former Kogi lawmaker, Honourable Dino Malaye over the paternity of her baby girl has found love again.

The beautiful mother of one is happy again after she found favour in the heart of her former London-based lover who joyfully took her back into his arms after the delivery of her baby girl for Dino Melaye.

Bisi Ibidapo is not only back in the arms of her former boyfriend, a popular London-based socialite she is also engaged to marry him.

In a recent interview, the mother of one said she now has a fiance.

‘I must confess that I never knew my love affair with the father of my baby would turn awry but it did. Fortunately for me, the guy I was dating before stood by me when my daughter’s father  rejected me. He saw all that happened as a script written by God, which had to play out. He stood by me throughout the pregnancy and he is still there for me. I am not bothered about any issue now. I just pray that the joy God has given me will live forever! Indeed, I am fulfilled as a woman.’ – said Bisi Ibidapo

Before Dino Melaye got her pregnant, she was in a serious relationship with a London-based socialite who lavished a house for her in Magodo estate but after her pregnancy news surfaced, the man reportedly kicked her out for a while.

After a while, Bisi Ibidapo revealed that her former lover has considered her back. The man later allowed the mother and her baby to move back into the expensive home in Magado.

As at the time of this report, Bisi’s socialite boyfriend is having a blast of his life in Lagos.

We also learnt the lovers have taken their romance to another level as they’re presently planning a glamorous wedding for this year.

Bisi Ibidapo’s shameful ordeal with Dino Melaye, a married father of three has taught her the lesson of her life.

Hope this beautiful woman will continue to maintain her dignity and honour.