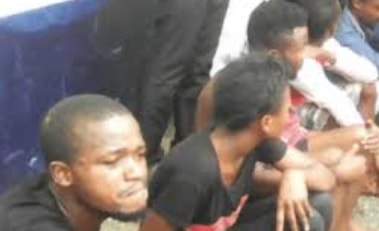 Parading the suspects, Mr Hafiz Inuwa, the state Commissioner of Police, said that the suspected cultist (name withheld) was arrested on June 27 at Etim-Edet Street in Calabar.

The police chief said that the 49 other suspected criminals were arrested for various offences.

According to the NAN, Inuwa said that the command had received a distress call from a concerned resident in Calabar that a group of suspected cultists were undergoing a fortification ritual.

He said that personnel from the Anti-Cultism and Kidnapping Squad swung into action and arrested the suspected cultist while others took to their heels.

“On the 27th of June, 2018, our men from the Anti-Cultism and Kidnapping Squad arrested one suspected cultist with two human skulls and charms during a fortification ritual.

“Other members of his gang took to their heels on sighting the police. Our men are on the trail of the fleeing suspects,’’ he said.

The police chief also said of the 49 suspects, one was arrested for allegedly raping an 18-year-old girl in Calabar.

Inuwa said four other suspects were arrested for allegedly robbing one Friday Okon at Yellow Duke Street in Calabar.

“Also, on the 29th of April 2018, our Anti-Cultism and Kidnapping Squad received a complaint from one Nkoyo Udosen that some gun men had kidnapped her husband, Udosen Udosen, and two of his friends at Atimbo area of Calabar.

“On receiving the information, our men swung into action and arrested seven suspects in connection with the crime.

“We recovered two locally made guns, charms, 30 rounds of cartridges and one dane gun from the suspects.

“The suspects have confessed to the crime and will be charged to court as soon as investigation is completed.

“In all, we are parading 50 suspected criminals who have committed various offences across the state since April till date,’’ he said.