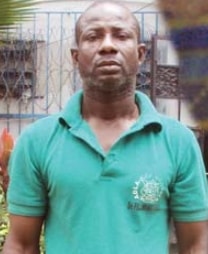 A man identified as Henry Anaele has been remanded in prison for allegedly beating his wife to death.

According to police investigation, the 40-year-old accused committed the offence around 11:45pm at their home, #72 Goodness Estate in Satellite town area of Lagos on Friday the 15th of June 2018.

He allegedly accused his late wife, Chinyere Anaele of collecting 200 naira from another man before he descended on her and beat her to coma.

She was rushed to the hospital where she passed on hours later.

He appeared before an Ebute Metta Chief Magistrates’ Court today where he was remanded in Ikoyi Prisons pending advice from the State Director of Public prosecutions .

The case was adjourned until the 6th of August.