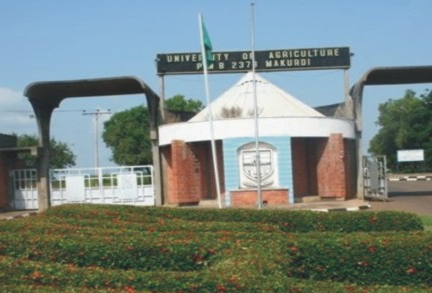 Five people including four students of the Federal University of Agri­culture, Makurdi (FUAM), and a security guard at­tached to a private students hostel have been killed by cultists.

Daily Sun gathered that the university became a theater of war as gunmen suspected to be cultists, on a reprisal attack, stormed the private hostel, Cham­ma Hostel on Tuesday night, killing four persons.

Daily Sun gathered that at about 11pm on Tuesday, suspected cult members stormed Chamma Hos­tel and moved to Block D room 2, where they re­quested to see one Aye, but the occupants of the room were said to have told the strange visitors that no one was bearing the name in the room.

Speaking to Daily Sun, hostel leader, Denen Ajobo, a 400- level Electrical Elec­tronics student, said the gang leader, who was not happy with he explanation of the students, ordered a member of his gang to fin­ish all the four students in the room.

“But as one of the sus­pected cult members tried to pull the trigger, one of the four students pleaded with the cultists to spare their lives but in the pro­cess one of the cultist shot him. He died later in the hospital. The cultists also shot the security guard at­tached to the hostel and two other students, who were returning to the hos­tel.”

Ajobo said that three other students who were injured in the attack were receiving treatment at the Federal Medical Center (FMC), Makurdi.

He lamented that no one was able to attend to the victims until about 6am Wednesday morning, when they were rushed to hospi­tal. “They died on the way before they could get to the hospital, he said.”

The hostel students representative revealed that the hostel was also invad­ed last Friday, when sus­pected cultists attempted to attack a student but he escaped.