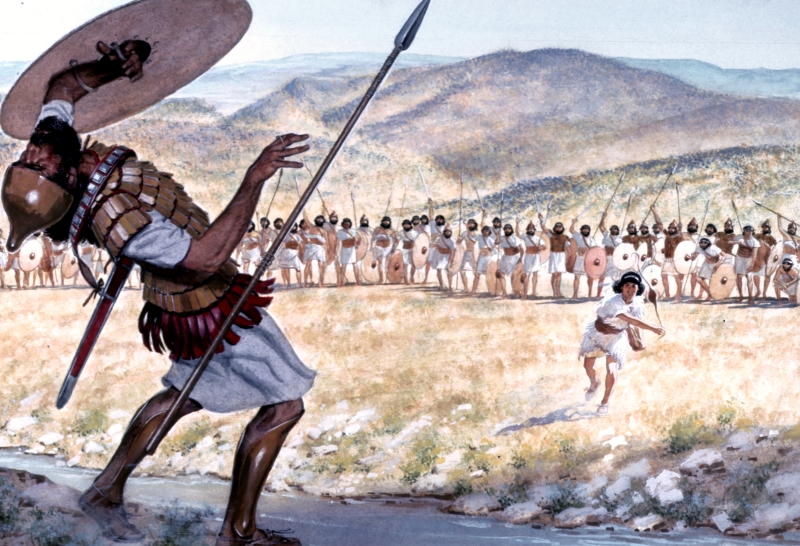 Sept 5, 2014 – Boko Haram Attacks ‘ll End If Only David Is Allowed To Battle This Goliath

Having critically examined how this uncivilised sect called Boko Haram has been destroying the image of Nigeria and seriously injuring its pride, my heart bleeds. As such I dare to put an end to this ‘nonsense’. (1Samuel 17:23-27, 31-32, 41-51).

With faith and courage, standing on the word of God; Nigeria shall be free from this plague brought by the Boko Haram (Job 22:30, Exodus 22:18).

The main cities in the northern part of Nigeria have been bombed on many occasions. In my consideration and opinion, it is because Nigeria has not given chances to the right people to fight for their dear country. I come to this conclusion based on what I see in the process of recruitment in the Nigerian Military and paramilitary alike.

This has given room for corruption as many prefer their relations who have no passion for protecting their country but interested in the take-home-pay to take up vacant positions in these security organisations.

This is the root-cause of Nigeria’s inability to prevent the Boko Haram militant group from gaining ground in the north-east.

Just when you imagine that it cannot get worse for the Nigerian military and its pride as a fighting force, it takes a further dive.

With the abduction of the more than 200 teenage schoolgirls from Chibok in north-eastern Nigeria State of Borno for over four months and yet no positive position has been taken about their rescue, the number of towns and villages being taken over by the Boko Haram insurgents is steadily growing.

It seems the Nigerian government and her military commanders are the only ones who believe their own propaganda, ignoring the true state of affairs in the troubled region.

For nearly a year, coinciding with the state of emergency in the north-east, there have been constant reports quoting foot soldiers saying they lack the equipment to match the firepower of the insurgents. If I may ask, have they ever consulted God for the solution?

Recently some soldiers claimed that sending them to engage the insurgents without adequate weapons was like sending them to die. I consider them as those who joined the military just to receive salaries and not with an intention to sacrifice for their country.

The crisis in the northeastern part of Nigeria has affected more than three million, statistics say.

The militants have caused widespread destruction through their bombing campaign. Last month, there was the unprecedented spectacle of soldiers’ wives protesting at the barracks in Maiduguri, the Borno State capital, against the deployment of their husbands to the battle front on the grounds that they were not properly equipped (did they marry a men who are determined to sacrifice or who desire take home pay?).

Before that, the senior general in charge of the same barracks barely escaped with his life when angry junior soldiers turned their guns on him after they heard about a bloody ambush in which a number of their colleagues lost their lives.
He escaped unharmed after being whisked away by his security aides, and was discreetly replaced shortly afterwards.

This was quickly followed by reports of mutinous conduct by some soldiers who refused an order to be posted to engage with the Boko Haram militants (what was their aim in joining the military?).

At all times the Nigerian military authorities issue standard denials and, in the case of the refusal to carry out orders, attribute it to “mischief-makers working for terrorists.”

On the protest by the wives of soldiers, Nigeria’s army chief, Lt-Gen Kenneth Minimah warned: “Any repeat of such acts, I will tell soldiers to use whip on the wives and bundle them out of the barracks.”

Who is the Boko Haram?

Boko Haram was initially said to be focused on opposing western education. Boko Haram, as it means, is ‘western education is forbidden’ in the Hausa language. It launched military operations in 2009 to create an Islamic state. Since then, thousands have been killed mostly in north-eastern Nigeria. Also, attacks on police and UN headquarters in the country’s capital, Abuja have been recorded.

The question I rhetorically ask is: ‘who are those that make up the Boko Haram?’

Boko Haram leader, Abubakar Shekau, was once reported killed by the Nigerian army. Today, he is in videos everyday (could this be his ghost?).

The military high command is apparently not taking lightly matters of what it sees as indiscipline, and there are reports of several dozen soldiers being court martialled.

All of that was before the dramatic report from the Cameroonian military saying that nearly 500 Nigerian soldiers had crossed the border after an encounter with Boko Haram insurgents. What a national disgrace?

The Cameroonians quickly disarmed the Nigerian soldiers, who the Abuja high command said had gone into the neighbouring country on what they called a “tactical maneuvre”. What a nasty statement!

Now the “maneuvering” battalion of soldiers had since been escorted back to Nigeria from the town of Maroua, about 80km (50 miles) from the border, and not much has been heard of the matter since then.

Privately, on every social media, there has been a furious debate about the incident, which has left many Nigerians questioning what may have happened to their fighting force, which performed creditably in several international peacekeeping engagements across Africa.

What many cannot understand is, why despite the huge budgetary and extra-budgetary allocation to the security sector, Nigerian soldiers do not seem to match what many see as the ragtag Boko Haram insurgents.

Most military hardware date back to purchases made under the civilian government overthrown in the 1980s.

The rot is blamed largely on corruption and some say the inadequacy is also a legacy of long years of neglect by military regimes, coupled with politicians who argue a strong army was a challenge to democracy, and as a result push only their relations who are only interested in the salary.

All these have allowed Boko Haram to fester, taking over and holding towns and villages hostage and hoisting their flags in places such as Gwoza.

The sect has also been emboldened to declare a caliphate in the area it controls.

The Nigerian defence headquarters recently dismissed this as empty rhetoric, saying the sovereignty and territorial integrity of the state was still intact. Yet, many Nigerians remain wary of such reassurances and are apprehensive about what the militants could do next.

I want the Federal Government to give room for, and if possible, invite those with dare desire to sacrifice for this nation.

I dare to put an end to this scourge brought by Boko Haram sect with God-given strategies (Joshua 10:18-19) if given an opportunity and backing (Deuteronomy 20:3-4).

I patiently wait for your prompt responds.

Dr Terfa writes from Port Harcourt, Rivers State and could be reached via drigbayimaterfa@gmail.com