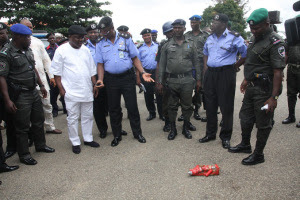 People fled for their dear lives on Saturday after the discovery of a strange object in front of the country home of Anthony Konwea, a top management staff of the Department of Petroleum Resource,DPR.

The strange object wrapped in a paper and held by a men’s tie with some electrical connections was discovered around 6:30pm In Asaba.

The discovery forced residents of the area to flee until it was detonated by anti-bomb Squad.