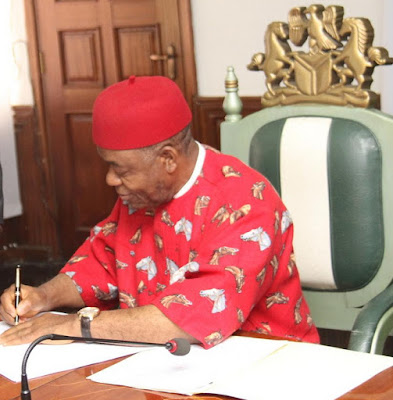 A group which says it is a voluntary association of concerned Abia citizens, Save Abia Initiative for Change (SAIC), has peti­tioned the Economic and Financial Crimes Com­mission (EFCC), detailing how the erstwhile governor, Chief Theodore Orji, his wife, Mercy Odochi, their son, Chinedum (a.k.a Iku­ku) and few of their cronies allegedly squandered N474 billion of Abia State funds between 2011 and this year.

In the petition marked SAIC/PET/001/15, and dat­ed July 3, 2015, addressed to the Chairman of EFCC, Mr Ibrahim Lamorde and titled, “How ex-governor T.A Orji squandered N474 billion of Abia State Gov­ernment funds leaving an external debt of $35.9m (N8 billion)” and signed by 20 persons, a copy of which was obtained by Daily Sun, Orji was alleged to have frittered away Abia’s N474 billion into his pocket, that of his immediate family and few of his close pals who he used as conduit.

In the petition, SAIC said from 2011 to 2014, the Orji family especially Chindum, (said to be richer than any state in the country despite the fact he was doing noth­ing before his father became governor), created different avenues to siphon public funds into their private ac­counts with impunity.

According to the peti­tioners, the former gover­nor’s alleged major source of loot were through loans from banks/refunds, funds siphoned through banks without purpose, illegal expenditures not backed by law and fraudulent prac­tices in Abia State Pensions Board. Others were alleg­edly through excess crude oil, using ASOPADEC as conduit, Internally Gener­ated Revenue (IGR), fed­eral allocations including SURE-P, internal debt, ecological funds and CBN, SME funds.

Giving a breakdown of the alleged looting by Orji, SAIC said of the N474 bil­lion, N10.5 billion was a loan obtained in 2012 by the state government with the Ministry of Local Gov­ernment and Chieftaincy Affairs in collaboration with the 17 local govern­ments.

Details of the loan, it said, were that each of the councils in the state sub­scribed for N500 million, bringing the total amount to N8.5 billion. Out of the N500 million loan obtained by each Council, their Tran­sition Committee (TC) Chairmen were given N60 million each to be spent as follows, N40 million for the development of their secretariats while N20 mil­lion was for the perimeter fencing of two schools in the local government areas at N10 million each.

Furthermore, from the N40 million meant for the development of the coun­cils’ secretariats, N7 million was paid back to the source being the cost of their offi­cial monetized vehicles and that of their deputies even when they were supposed to have paid from their sala­ries.

The state, according to SAIC, collected N2.3 bil­lion as Sure-P funds from January 2102 to May 2015 and alleged that these funds were given out to one Dr. (Mrs) Uruakpa, Mrs Ak­punku Chief (Mrs) Orji and Chinedum Orji (for the youth), but they spent less than 40 per cent of the amount and embezzle the rest.

Central Bank of Nigeria (CBN) Small and Medium Enterprise funds of N2 bil­lion and close to N1 billion ecological funds were also alleged to have been fraud­ulently misappropriated.

Continue Reading
You may also like...
Related Topics:474 billion, save abia, theodore orji