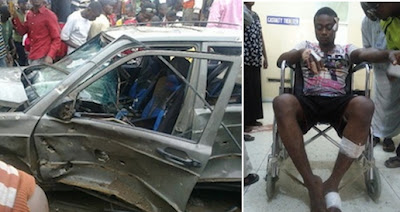 Following series of bomb blasts that hit Kano on Monday night, mortuary sources at the Malam Aminu Kano Teaching Hospital, AKTH have confirmed that 24 dead bodies were brought to the hospital, while 3 critically injured people were being treated.

“I can confirm to you that 24 dead bodies were brought here—20 men and four women. Three critically wounded persons are also receiving treatment here,” said a source in AKTH.

The death count of 24 at AKTH, excludes other victims in other government hospitals—where the dead and wounded were admitted.

At AKTH, Emeka Mba, a top management officer of The Young Shall Grow Motors was lying critically ill.

According to him, “this is a tragic incident; we are surprised why we were chosen as targets. I think those that perpetrated this dastardly act must be fished out. I am in real pains.”

Emmanuel Ani, a worker in a relaxation joint, said he could not describe what actually happened.

“As I am talking to you now, I cannot explain what really happened. The only thing I could remember was that I was about serving a plate of Isi-ewu for a customer when I heard a deafening noise that shook the ground and displaced people.”

Another critically injured victim is Ejike Godwin.He needs some surgery to stay alive.

At Abdullahi Wase Specialist Hospital, Mr Alade Ezekiel, 47, a Printer, told this reporter on his hospital bed that, “at about 9 p.m. on Monday, I came out to take a dish of Amala; all of a sudden, I heard a deafening sound, and before I could come to realities, a sharp object pierced through my left hand and blood gushed out. Another bomb exploded and before I could manage to escape, another object pierced into my leg. At this time, I could not move, but the only thing I could do was to crawl when a soldier came to me and rescued me.”

In his reaction, Kano state Governor, Engr. Rabi’u Musa Kwnkwaso who spoke through his Media Manager, Halilu I. Dantiye said: “Governor Rabi’u Musa of Kano state has strongly condemned last night’s (Monday) multiple bomb blasts at New road and Enugu road in Kano city. The governor, who visited the scene of the attack early this morning, described the incident as devastating, stating that it is an attack on the whole of Nigeria.

“This attack on Sabon Gari is an attack on Nigeria because Muslims and Christians are involved. Several people of different ethnic extraction have either lost their lives or are critically injured. Whoever did this thing targeted Nigeria”, Kwankwaso stressed.

“Governor Kwankwaso, who visited Murtala Muhammad Specialist Hospital in Kano city to commiserate with the hospitalized victims, promised that the state government will shoulder the cost of their treatment.

“He therefore directed the state Commissioner for Health to ensure that the victims get the best of treatment in public or private hospital in the state.
The governor extended heartfelt condolences to the families of those who lost their lives in the incident, praying Allah to stand by them in this moment of sorrow.”

According to the Police account in a statement signed the Kano Command spokesman, ASP Magaji Majia: “multiple explosion at Enugu/Igbo Road and New Road at about 2100 hours, the incident occurred at a Tavern known as Mary Cool and Zuma Cool Spot, respectively. As a result, 12 died on the spot, 12 injured, 19 vehicles parked at the scenes damaged. Corpses and the injured were to Government Hospitals in the state. We are still monitoring events as investigations remain on progress.”

But in another statement signed by the President of Ohanaeze Ndigbo in Kano, Chief Michael Tobias Idika, 39 people died in New Road and bombing and six in Igbo/Enugu Road; and also unspecified numbers of people who got injured.

“The team of Ohanaeze Ndigbo, Kano state chapter arrived the scenes at about 9:30 P.M. and witnessed the moving of dead bodies and the wounded by security agencies, mostly the Army”.

“Ohanaeze Ndigbo, however, can recall that this is not the first time terrorists invaded Sabon Gari, particularly on New Road. In fact, on that same spot where the latest incident happened, several attempts have been made to terrorize Nigerian citizens. As a reputable organization, we call for adequate security of lives and property in northern Nigeria.

“Ohanaeze Ndigbo also commends the spirited efforts of the Assistant Inspector General of Police, David Omojola in-charge of Zone 1, who was accompanied by the Commissioner of Police, Musa Daura to the scene of the incident for on-the-spot assessment.

Another Community Leader and veteran Journalist, Prince Ajayi Memaiyetan said of the development: “What happened is that for the past two months, we in Kano have been enjoying peace- of the – grave yard. We are waiting for security agencies to give us details on what really happened. I was at Festing Road when I haerd the first blast and I had to manourvre like other residents to run for dear life. The truth is that the security were not as effective as before because of the lull in attacks.”