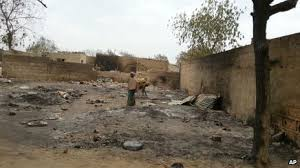 Over 185 people including women and children were reported to have been killed by either gunshots or fire after suspected Boko Haram gunmen engaged soldiers of the Joint Task Force in a deadly shootout that left the commercial border town of Baga in Borno State completely burnt down.

Local government officials, who spoke to PREMIUM TIMES, said 185 persons died, at least 2000 houses, 64 motorcycles and 40 cars were burnt in the wake of the attack.
The Borno State Governor, Kashim Shettima, visited the town on Sunday and was told by residents that soldiers were responsible for the torching of houses that led to the death of many.

PREMIUM TIMES gathered that scores of others are currently hospitalised with various shades of burnt injuries.
Residents said most casualties, especially the aged ones and children, died as a result of the conflagration that engulfed the entire town.

Governor Kashim Shettima, who visited the town on Sunday, became emotionally drenched at the sight of charred houses,vehicles and how homeless residents took refuge in the bush.
The Commander of the Task Force, Brigadier General Austin Edokpaye, explained that the fire that consumed the town and resultant deaths should be blamed on the Boko Haram terrorists who opened fire on soldiers while hiding in the mix of civilians.

A local trader in Baga told PREMIUM TIMES that the attack started at about 8 p.m. on Friday and was continued the next day.
“Only God can understand what we have done to deserve this. But the soldiers were mindless that night in their approach; they killed and burnt our houses, chased everyone into the bush including women and children. So far we have buried 185 corpses. – some were burnt beyond recognition; others are hospitalised with various degrees of burnt,” said the resident who begged to remain anonymous.

Governor Shettima who drove through the burnt town amidst heavy motorcade of security personnel condemned the incident which he said was a ‘nasty occurrence’.
At the town’s hospital, the governor had to commiserate with women, children and aged men receiving treatment for various degrees of burnt caused by the fire.
Bashir Isa, a grocery merchant, told PREMIUM TIMES that “everyone has been in the bush since Friday night; we started returning back to town because the governor came to town today.

“To get food to eat in the town now is a problem because even the markets are burnt. We are still picking corpses of women and children in the bush and creeks.”
Brigadier General Edokpaye denied allegations by residents that the shootout was unprovoked.

“We lost an officer during the attack on our men on patrol. We’ve received an intelligence that some suspected Boko Haram members usually pray and hide arms at a particular mosque in town. It was around that mosque that our men were attacked with several of them injured and an officer died.

“When we reinforced and returned to the scene, the terrorists came out with heavy firepower including RPGs which usually has a conflagration effect,” the army chief said.
Governor Shettima pleaded with fleeing residents to return to their burnt homes as a committee had been empannelled to provide a palliative compensation for the loss they suffered.

He also called on the commander to “take full charge” of his operation and ensure he personally supervises his field officers from time to time “in order to avert such nasty incidences in the future.”