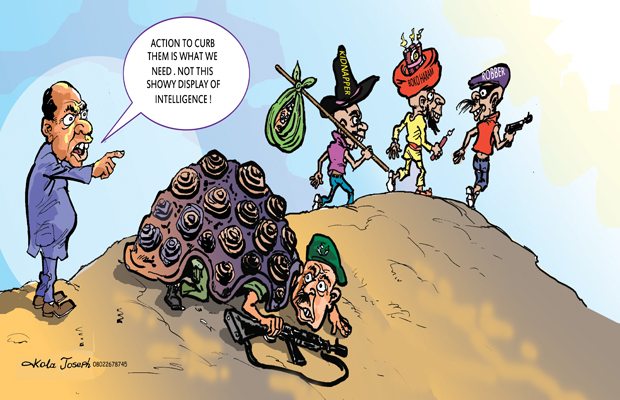 Ex-Nigerian Defence Minister recently in Abuja warned Nigerians about the possible ‘somalianisation’ of Nigeria as a result of the growing impudence and audacity of boko haram. naijagists.com

The former military strongman who masterminded the July 1966 counter coup d’etat drew the attention of Nigerian leaders to a number of socio-economic problems facing the North which if unattended to could lead to the somalianisation of Nigeria.

But regrettably this former Defence Minister did not enumerate the socio-economic problems. This particular gathering on May 1, 2012 attracted the crime-de-la-creme of Northern political leaders including a former military head of state who also contested the 16 April, 2011 Presidential elections.
The problem with Nigeria is that there is a dearth of true leadership.

Most Nigerian leaders only speak the truth when it is convenient for them to do so. If not, how can this highly respected politician say that boko haram came into existence because of some socio-economic problems facing the North? If the truth be told, the North is the ‘spoilt child’ of the Nigerian Federation.

What justification has the former Defence Minister to blame the present administration for the North’s social and economic problems? I did my National Youth Service Corps in the North and I know that Northern students are over pampered even to this present day.

In the early 1980s, I knew that Northern students had free secondary school education and were even paid transport allowances to and from schools during holidays. Female students were even greater beneficiaries of more goodies.
Even today the Joint admissions Matriculation Board admits students of Northern origin with far lower JAMB scores than other students from the south.

The Federal Government has for long encouraged education in the North. Provisions were made by the Federal Government for the education of the nomadic child when Professor Jibril Aminu was Education Minister in the 80s. And now President Goodluck Ebele Jonathan has just recently spent billions of naira to educate the almajiris by opening lavishly equipped schools for them.

But I have not heard of any Nigerian government making special provisions for the education of the most disadvantaged Nigerian child. That child is the Niger Delta child who lives mostly on ’tilts and floating’ houses in the creeks and forests of the Niger Delta where there are neither primary nor secondary schools. An educated Niger Deltan is the lucky one with uncles and aunties in the cities where there are schools on every street.

And yet our former Defence Minister is talking about socio-economic problems in the north. The average northern child believes that Nigeria must be ruled for ever by the North and that everything belonging to Nigeria is owned by the North. In Federal Government Offices and parastatals the overbearing ‘ownership mentality’ of the Northern Directors-General and even junior officers is very undisguised and a conspicuous pride of the ‘heir-apparent’ mentality.

What socio-economic problems is the former Defence Minister talking about? Boko Haram has spoken in very unmistaken terms that western education to them is forbidden and unacceptable. Apart from that, boko haram is making it mandatory for Nigeria to do away with western democratic governance and install sharia governments both at state and federal levels. Boko haram abhors western technology, they abhor western inventions and civilization, they hate western education and with the unblushing insensitivity of a hard hearted murderer they despise anything western and yet they use western guns and bombs, cars, telephones etc.

What boko haram is asking for is a separate Islamic country for the North as I do not see Sharia government taking over governance in Nigeria except through violence as being unleashed by boko haram.

There are so many boko haram sympathizers in Nigeria including our former Defence Minister who have to support boko haram to guarantee their personal security and safety for their properties all over the world. Now that boko haram is picking their targets it is much safer to publicly be a boko haram advocate as our wise former Defence Minister and others have done.
In the fray of boko haram sympathizers are former Military Heads of State, Senators, members of the House of representatives, Judges, some Northern Governors who even pay monthly protection fees etc.

Most of these boko haram sympathizers are among those who swore to make Nigeria ungovernable for President Goodluck Jonathan. And from time to time they have to make positive suggestions to the President on how to handle the boko haram issue with kid gloves. A good example was when a former National Security Adviser advised the President not to use force but to dialogue with the faceless boko haram group.

These same people advised the late President Umaru Musa Yar Adua to set up a special task force to barter the Niger Delta Militants to submission and ultimate surrender. The Former Defence Minister should know that the Socio-economic problems under reference are those created by Nigeria’s ruling elite who have virtually held this country to ransom. For instance our leaders have built perishable empires here on earth while the poor masses troop daily to churches and mosques seeking salvation for their battered bodies and souls.

For instance when I visited Takum in February 1979 our former Defence Minister only had a hut as his home but today the same former minister is a dollar billionaire who does not know how to cope with his excess wealth most of which was garnered from the sale of his oil blocks.

The Nigerian economic environment is more capitalist than Americans which is the citadel of global capitalism. If not, why should government allocate oil blocks to private individuals instead of to communities which will have positive domino advantage of spreading the benefits of democracy? These are the socio-economic problems facing Nigeria.

When wealth is concentrated in the hands of a few while the 99% wallow in abject poverty, it will surely create socio-economic problems. The North has governed Nigeria for 38 years and has produced more trillionaire capitalists than any other part of the country. The philosophy of capitalism by its original concept is very hostile to the poor masses. Capitalists weigh and count everything in terms of money very much like the old Venetian shylock.

The greatest satisfaction for the capitalist would be to gain maximum profit with minimum or zero input or investment, like selling off freely given oil block for a $1 billion. While the capitalist plans how to increase his wealth, he does not take into account the human elements of suffering, sacrifice, honesty, sharing his profits and resources with the poor or even giving the surplus wealth to those who created this wealth. The impoverished peoples across the globe have realised the destructive profile of capitalism and have come out en masse onto the streets. The’occupy’ syndrome is now everywhere in Britain, USA, Greece, Portugal, Italy, etc.

The socio-economic problems in the world and all over Nigeria are as a result of decades of unresolved cleavages between the wealthy and the poor, between the capitalist and creator of capital and between the haves and the have-nots.
After 38 years of Northern hegemonic leadership, there is very little to show any human capital development either in the North or even in the south. For instance the ìarea-boy’ syndrome which is nurtured and cultivated by successive governments in Lagos State of Nigeria is a time bomb waiting to explode.

Even though boko haram added a spice of Islamic fundamentalism, the foundational issues at stake are an insensitive and total neglect of Franz Fanon’s The Wretched of the Earth who toil night and day to create capital for the capitalists of the Nigerian society.
But kudos must go to those Nigerian leaders especially from the north who have condemned the inhuman atrocities of boko haram in very plain terms. These leaders have spoken even at the risk of their personal safety and threat of imminent death.

I salute the courage of the Sultan of Sokoto, Alhaji Saíadu Abubakar who has shown so much concern not for his personal safety but for the safety of the Nigerian Federation. The Sultan who labelled boko haram ìanti-Islamî and an ìembarrassment to Islamî has made frantic efforts to resolve the boko haram logjam but to no avail.
Other Northern leaders who have spoken in the same vein with the Sultan include the Niger State Governor, Dr Mu’azu Babangida Aliyu, Mrs Sarah Jubril who is a Special Adviser to President Goodluck Jonathan and recently Gen. Yakubu Gowon Nigeriaís former military Head of state.

The worrisome silence of the Northern army generals, both serving and retired, former military and Non-Military Heads of State, serving and former governors is highly indicative of a complicity and acquiescence that runs very deep in a whirlwind that could tear this nation into shreds.

And if the fragile cord that binds us together snaps, Nigeria will descend into abysmal chaos and violence that will transit from somalianisation and finally to sudanization.
It is a transition all Nigerians must unite now to stop before it is too late. We all know that Nigeria is an amalgamation of two culturally divergent protectorates. We must all struggle to keep it so, lest the worst happens.

Continue Reading
You may also like...
Related Topics:boko haram, sympathizers