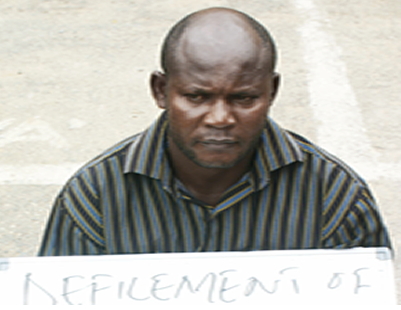 Emmanuel Mahbatie, a 48-year-old bricklayer has been arrested for allegedly defiling his neighbour’s 18-month-old baby. The incident occurred on August 3, at Adebayo Street, Owutu area of Ikorodu, Lagos.

The state Commissioner of Police, Mr. Fatai Owoseni, who paraded the suspect and others before journalists yesterday at command headquarters, Ikeja, said the baby girl went to play with the bricklayer’s children in their apartment when he allegedly inserted his fingers into her private part.

Owoseni said the baby was referred to the Ikorodu General Hospital, where it was confirmed she was violated. Mahbatie, however, denied the accusation. The father of five said he was only playing with the baby and that he could not do such a thing to her.

“A few minutes later, the girl’s mother came back screaming that her daughter could not urinate properly again. She said that I have inserted my finger into her private part.

That was how some of the residents who were with her tried to lynch me. “Before I knew what was happening, policemen from Owotu Division had come to arrest me for the offence I knew nothing about.

I begged the policemen that I could not do such a thing to a minor like that.” Mahbatie said the mother of the baby accused him of placing the baby on his bed before inserting his finger into her private part.

“My children were also with me on the bed that fateful day. How can I do such a thing like that when I have a wife? I want the case investigated properly because I don’t want to suffer for what I do not know anything about.” Mahbatie said he showed the baby’s mother his fingers.

“How can my fingers enter the private part of that small girl? I don’t know what I have done to the woman to punish me with this kind of allegation.”