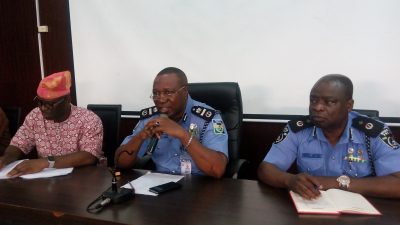 The officials of Ogun state Police command  have arrested a local chief in Kokoro near Idiroko for allegedly being part of a car snatching syndicate in the border area of Ogun State.

Mr Abdul-Majid Ali, Zone 2 Assistant Inspector General (AIG) of police, told newsmen that the suspect was arrested along with 14 others by the newly-created Zonal Investigation Squad (ZIS).
According to the police, the suspect, a 49-year-old ex-convict, and his gang are notorious for terrorising residents of border towns in Idiroko area.

“I am an ex-convict and I was in prison in 2005 where I spent a year for armed robbery.
“I was called last week to Abeokuta where I was arrested for being in possession of an AK-47 rifle which I know nothing about,” said the suspect.

Another member of the gang, also an ex-convict, confessed that the syndicate specialised in stealing cars from Nigeria and taking them to Benin Republic.

“I kept an AK-47 in possession of the local chief, but was arrested with a locally made short gun and 10 live cartridges,” he added.
According to the police, members of the gang were arrested on their way to rob a fish depot in Ijoko area of Ogun State.

The police said that the gang also confessed to have snatched an AK-47 rifle from a police officer.
Also paraded were six other suspects arrested for armed robbery, receiving of stolen items and kidnapping.

Others were four men arrested for allegedly issuing dud cheque, fraudulent conversion, obtaining under false pretences and cultism.
Two other suspects, who allegedly tricked a USA-based woman to pay $40, 000 into their bank account, were also paraded.

The squad which was set up last month by Zone 2 police command for crime control in Lagos and Ogun, also recovered five locally-made guns, 21 live cartridges and 1 imitation gun.