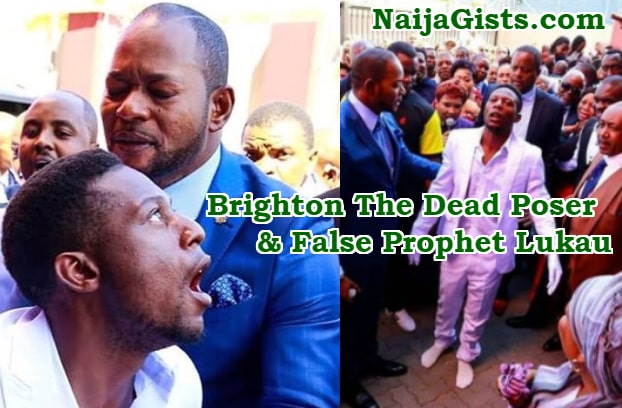 Brighton, The Dead Poser And Pastor Alph Lukau: Like A Scene From Nollywood Blockbuster

Wonders shall never end. Like a scene from a Nollywood blockbuster, a “man of God” is seen in a video praying over a supposedly dead body lying in an open coffin. Standing in front of a mammoth crowd of worshippers scattered in every direction behind him, he can be heard screaming for the ‘dead man’ to rise as he continues with his prayers. Then the ‘miracle’ happened. The man, who by all appearances was lying dead moments before, suddenly jolts back to life, sitting up in the coffin, with a quirky expression on his face – a look that suggested he had been yanked back to the land of the living from the great beyond. The ecstatic crowd cheers on as the triumphant religious leader nods in satisfaction at his own (or his god’s) powers.

The video circulated around the web like quick-fire, like most absurd things do these days. Before long, the criticism began to pour in, then condemnation from ‘peers’ which prompted a disguised admission of fraud and now at least one lawsuit has been filed. The ‘man of God’ in question is South African pastor, Alph Lukau of the Alleluia Ministries, based in the affluent area of Sandton in Johannesburg, South Africa. His ‘dead’ subject has also been identified as Brighton Moyo, a Zimbabwean who reportedly works in Pretoria, and who has gone underground since he found new (and probably unwanted) fame in pastor Lukau’s church. The suppliers of the coffin and the funeral services provider where a hearse was obtained have now reportedly filed a suit against the pastor for involving them in his ‘show’.

Although some say there are no such things as miracles, in Nigeria, we know all about miracles. Apparently, the religious hustle is not uniquely Nigerian. Like Pastor Lukau, who still remains defiant that he is the real deal, we have had several fake miracles busted by eagle eyed Nigerians, but all to no consequence. In the business of miracles, the first step is to brainwash unsuspecting worshippers, to a level where it becomes sacrilege to even entertain the thought that the religious leader may not be what he/she claims to be. A perplexing industry of ‘soul harvesters’ is growing, especially across Africa, which is home to the poorest people in the world. There seems to be a direct link between abject poverty and gullible religious followership, where the one ensures the perpetuity of the other.

Without doubt, this is a sensitive topic, especially in these parts. However, no sensible person that is still in control of their thinking faculty would have seen the viral video at Pastor Lukau’s church without being disgusted by the charade. To begin with, the acting of Brighton, the dead poser, could not have won him any awards if he was the only contestant. Pastor Lukau has also come out to say he may have noticed that the very alive Brighton was breathing while in the coffin. The video evidence is as clear as day. In the world of the living, we call it fraud.

It cannot be denied, that this kind of fraud is being perpetuated everyday, all over the world, especially in Africa. There are so many names that can be called in Nigeria, but the voice of supporters defending their religious leaders will drown any criticism or accusation. It has happened many times. The blind receive miraculous sight, everyday, on the altars of many a pastor, bishop, reverend, apostle, etc. But the cure for blind followership in religion is yet to be found. As the likes of Boko Haram and ISIS have proven, it is not a purely Christian phenomenon. The motives may differ, but spiritual gullibility has no other name.

The scourge of spiritual entrepreneurs has so pervaded the African continent that drastic measures have been taken in the past to curtail the activities of salvation scam artists, with their fake tickets to heaven. Take Cameroun for example, when Paul Biya, President of Cameroun, ordered the closure of about 100 pentecostal churches in key Camerounian cities sometime in 2013. The order was criticised, as expected, but it drew attention to the truth of fraud, deceit and manipulation that has become the norm in such establishments. If Paul Biya had visited Nigeria, he would have realised that the problem is not with pentecostal churches alone. With miracle working reverend fathers now in operation in Nigeria, no denomination is left out.

Tim Omotosho is a Nigerian who operated his ‘ministry’ in South Africa but is now facing charges of rape and human trafficking in Port Elizabeth, South Africa. His arrest drew wide attention, but the things he stands accused of continue to happen, especially in Nigeria. Families have lost relatives to religious organisations, where they live at the pleasure of their leader. There is that one case, involving a prominent Emir in Northern Nigeria, where a little girl in Lagos was spirited away to the north, to a Muslim conclave where her Christian parents were barred from seeing their teenage daughter. It is all in the same vein of blind religious followership that easily becomes radicalism.

It is a wide opinion that poverty facilitates spiritual gullibility. However, one curious detail of Pastor Lukau’s resurrection charade is that his church is located in one of Johannesburg’s more affluent neighbourhoods. Even in Nigeria, the rich and mighty bend their knees before powerful ‘men of god’ and are quick to follow directions whenever they are prompted by these religious leaders. This complicates the poverty argument and further mystifies the rush for spiritual salvation that has gripped Africans. When systems do not work the way they should and one virtually risks life and limb every time we step out of the door, then it is at least understandable why people are desperate for protection and salvation in these parts.

It is not anybody’s place to speak about what another person choses to believe or practice within their rights. However, the individual choices of people in this regard is leading to the building of more churches than money making places of business, or schools and hospitals and other necessary establishments. In this respect, it becomes a national concern, especially when it is being driven by fraudulent motives in many cases. In Enugu some time ago, a group of ‘miracle merchants’ were apprehended. Their business involved helping pastors all over the country stage miracles everywhere. Like Brighton, whose friends say he has faked miracles in the past, they made a business out of staging miracles.

In developed countries, the question of religion is quite muted. Maybe because the authorities rise to their responsibilities to a larger extent than they do here, people are less concerned about spiritual reassurance. It is no wonder that foreign religious leaders love to crusade in African cities where they get more crowds than they do in their better working societies. Yet, the religious fever that envelopes our cities is a direct contradiction to the vice and debauchery that grips the society.

There is no legislating religious freedom, as President Biya of Cameroun sought to do. However, he was right in thinking that the fraud that pervades religious establishments is worthy of attention. There is a serious need for some action to prevent the incursion of career criminals into the landscape of religion. The institution of more stringent requirements to set up a religious establishment may be a start, and random investigation of ‘miracles’ should not also be out of the question for the sake of sanity in society. Anyone with nothing to hide should have no problem with this.

Since Pastor Lukau is not operating in Nigeria, there may be repercussions for him, especially now that there are suits filed against him, and Brighton will most likely be found and quizzed about his involvement. It may take one high profile case of fraud being uncovered in a religious establishment in Nigeria before the veil of ultra-religiosity can begin to fall from the eyes of many in our society.