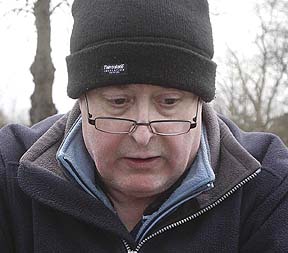 A British nurse with a cannibalism fetish, Dale Bolinger, 58, who fantasized about killing and eating a 14-year-old girl, has been convicted on Monday of sexual grooming.

Bolinger was found guilty at Canterbury Crown Court of attempting to meet an underage girl following sexual grooming, an offence which carried a maximum sentence of 10 years.

During the four-day trial in Canterbury, south-east England, the court heard that Bolinger, bought an axe the day before he planned to meet the girl and that he had told her he wanted to behead her.

The married father of three had met Eva, whose true identity has not been established, but who said she was a Mexican living in Germany on the website “Dark Fetish Network”.

In his profile on the website he listed his interests as “cannibalism, mainly the hunting and preparation of young but sometimes not so young women.”

Bolinger claimed to have already eaten a 39-year-old woman and a 5-year-old child, though he denied having done so in court, saying it was all “just in fantasy.”

In chats with “Eva,” he had described how he wanted to have sex with her and then eat her.

“The idea of us making love and then eating you is a great turn on!” he said.

Bolinger has arranged to meet “Eva” at Ashford International Station in September 2012, but she did not turn up.

The message exchanges were later discovered by the FBI in New York, which traced Bolinger’s email address, to his home in Kent.

The information was then passed on to British police.

After his arrest, police also discovered digitally manipulated photographs of children with labels.

The prosecution argued that this showed he had a sexual interest in children relating to cannibalism.

Bolinger told police that he had begun fantasising about cannibalism at the age of six as a result of his “very domineering” mother, and that it was “less to do with sexual gratification and more to do with anger.”

Questioned about the images, he said: “I do not find children sexually attractive, but I do find them interesting as a food source.”

In court, Bolinger said he had never believed that “Eva” was a real girl, but rather a man in his 30s “surrounded by pizza boxes” and that he had bought the axe to clear tree stumps from his garden.

Before the trial, he also admitted several other charges including one of administering a poisonous or noxious substance by putting a cloth soaked in dry cleaning fluid over a female friend’s mouth in 2010.

Detective Insp., Rob Chitham, said the investigation had been “long and complicated” because most of the evidence was in the United States, and that British police had worked closely with the FBI and other US law enforcement agencies.

“The people who use fetish chat rooms go to great lengths to hide their identity, and specialist knowledge and equipment is needed to determine who they are and where they live,” he said.

Bolinger is to be sentenced on Sept. 19, after a psychiatric report to assess the level of risk he represents to the public.