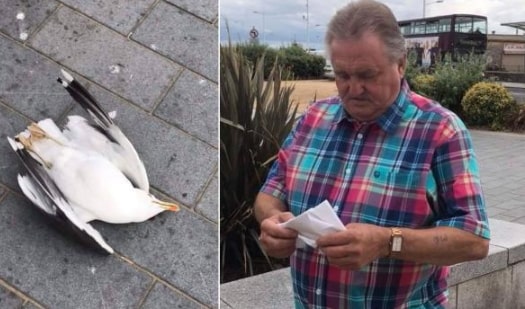 A British man is declared guilty after it was discovered that he beat a seagull to death for knocking his chips out of his hand.

According to Raw Story, 64-year-old John Llewellyn Jones killed the seagull last year while on a trip to Weston-super-Mare. Jones was eating a bag of chips when the bird knocked over the snack.

Multiple witnesses stated that the Cardiff resident grabbed the bird by the legs and slammed it against a wall. They also added that children also watched in horror while Jones angrily killed the bird.

The seagull is a protected animal under the Wildlife and Countryside Act of 1981. Jones pleaded not guilty in court but was found guilty after judges listened to witness testimonies.

Inspector Simon Evans says the act was cruel and unnecessary based on the events that unfolded:

“This was an unthinkable and despicable way to treat an animal with this gull smashed against a wall by the man solely because it knocked chips from his hand.

“This was deliberate cruelty borne from the fact that this man cared more for his chips than what his actions did to the poor gull. Simply, the man showed blatant disregard for an animal because he was annoyed about his chips.”