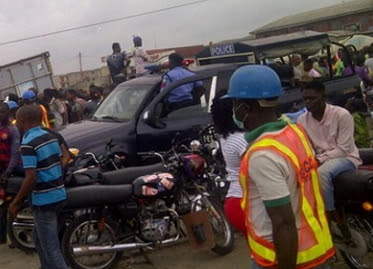 A danfo bus driver, Monday Asien, who allegedly bite a police officer on official duty, on Friday appeared before an Ikeja Magistrates’ Court in Lagos.
45-year-old , a resident of Makinde Street, Alausa, Ikeja in Lagos State, is facing a two-count charge of threats to life and assault.

The prosecutor, Sgt. Yomi Egunjobi, told the court that the accused committed the offences on May 30, at 8.00p.m., at his residence.

He said the accused assaulted and prevented some police officers from carrying out their lawful duties.
“The officers were in the accused residence following a complaint by one Adanma Anachuma, his neighbour, over an alleged violent act and threat to life.

“When the accused sighted the police officers, he took to his heels, but was caught.
“Assien, while trying to escape, punched and bite one Sgt. Godspower Okoro, on the hand causing him bodily harm and also tore the uniform of Cpl. Tajudeen Alimi.

“The accused was finally overpowered and brought to the station where he continued fighting, until he was locked up,’’ Egunjobi said.