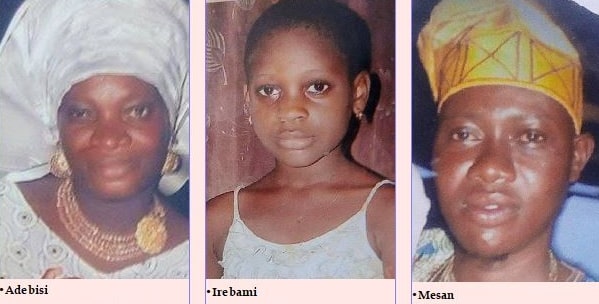 By Kunle Akinrinade, The Nation

A Nigerian woman, Adelowo Adebisi  has accused her ex Togolese boyfriend, Kofi Mesan of abducting her 8 year old daughter, Irebami and relocating her to Togo.

The mother of 4 from Ondo state said Mesan was not the father of the girl.

According to her, Mesan, a Lagos-based herbalist, who resides in Isheri-Olofin area of Alimosho Local Government, allegedly tricked her into releasing her daughter to him, promising to help her enrol the girl in school.

Adebisi claimed that her daughter’s father was one Toyin Awolere, a spare parts dealer at Ladipo Market, Mushin, Lagos.

She said that Awolere proposed to her in 2007, and their relationship resulted into a pregnancy.

Adebisi said Awolere abandoned her shortly after her mother died of a strange illness.

She said she was introduced to Mesan in the course of searching for a solution to her mother’s mysterious illness.

‘’I was introduced to a spiritualist known as Kofi Mesan at Idimu, Lagos, by one of my relatives called Bunmi, and after a week, my mum passed away.

‘’I had issues with Awolere, after giving birth to our first daugher, Blessing. But in 2009, I reconciled with Blessing’s father (Awolere) and gave birth to another baby known as Irebami at Oko Afo area of Badagry, after, he came with his relatives to beg my family.’’

The reunion did not however last long as Adebisi and her husband went their separate ways, after which she ran into Mesan again.

‘’As a result of my predicament, I used to visit Mesan, a Togolese, who lived very close to my father’s house, and he asked me out but I rejected his overtures. I stopped going to his house and relocated to Mushin. I later had two sons, Emmanuel Abumere Isaac, for one Abraham Abumere. Abumere agreed to take care of Irebami and he enrolled her in a private school in Ikotun, Ikotun.

‘’Unfortunately, my marriage to Abumere crashed and I had no place to live. That was the time Mesan got my telephone number from my father and promised to help me. He said that he would enrol my daughter in a school in Benin Republic, because his apartment was too small for me and my children.

‘’ I had no place to stay and Mesan gave me a room to live in. He used to have a wife who, according to neighbours, moved out of his home when he subjected her to beatings. Mesan said I should be telling people that he is Irebami’s father, but I declined. Not long after, he (Mesan) told me that he had taken the child to Togo to further her education. I rejected his offer after visiting Togo with him only to discover the deplorable environment of the community he took my daughter to.

‘’When I insisted on taking my daughter along, he asked me to come with him to a place he wanted to visit before leaving for Nigeria. By the time he drove his car for some hours, we had reached Benin Republic. When I confronted him for tricking me. He promised that he would go back to the place two weeks later. He said that he deliberately left my daughter behind because taking her back to Nigeria at that period of time would arouse suspicion of security agents and that he did not want to be seen as a child trafficker. Since then, he has refused to bring back my daughter and I have left his house.’’

He claimed to have impregnated Adebisi, while they were dating a few years ago.

‘’ She is not saying the truth. I dated her while she was living with her father and she became pregnant. She ran away with another man and I could not locate her whereabouts until recently.

‘’Now, I have taken back what is mine(Irebami)and she is making unnecessary allegations against me. Irebami is my daughter, I have taken her to Togo and enrolled her in a school there.’’

Continue Reading
You may also like...
Related Topics:boyfriend, kidnap, togolese

Bus Driver & Passengers Kidnapped In Ikere Ekiti.. N5Million Ransom Demanded For Their Freedom
Biblical View Of Dating After Divorce & What The Bible Says About Dating While Separated