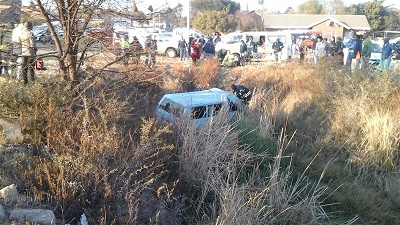 Not less than 10 people died while 9 others were injured when an auto crash occured at Itose area of Oyo Ibadan Expressway over the weekend.

FRSC officials said the Toyota Hiace bus coming from Sango Ota in Ogun State ran into a ditch while trying to manoeuvre his way after he saw FRSC officials on a routine check nearby on Saturday.

In a bid to escape, he swerved off the road, lost control and skidded into a ditch.

The bodies of the deceased have been deposited at Adeoyo Hospital mortuary in Ibadan while the injured are currently receiving treatment at the Akinlolu and St Patricks hospitals in Ibadan.