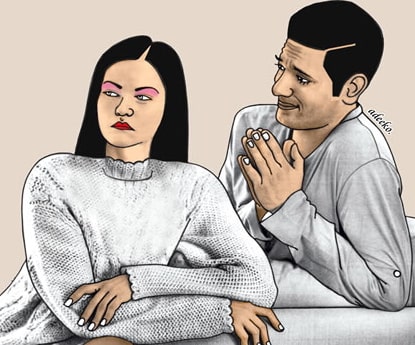 A housewife, Deborah Olusola, on Wednesday urged an Idi-Ogungun Customary Court, Agodi in Ibadan, that her husband, Pastor Sunday Olusola, lured her into marry through fake prophesy.

The NAN reports that Deborah had approached the court seeking for dissolution of her 18 months union with the pastor over insincerity, infidelity, nagging, and brutality.

In her testimony before the court, the 23-year-old woman, narrated how Olusola approached her and promised to assist her spiritually.

“My lord, he promised to assist me but later told me that God said both of us should become one through marriage.

“I believed the prophesy because I thought it was truly God’s voice and we got married after few weeks.

“Again, he prophesied that my mother should resign from her place of work and relocate to our matrimonial apartment.

“He said God would kill her if she didn’t obey the purported God’s voice and my mother yielded to the prophesy because she too believed him as a man of God.

“He began showing his true colour immediately I got pregnant, maltreating me, became less concerned about my well-being and brutalised me.

“I passed through hell during the pregnancy of the only child of the marriage.

“His parents too nagged and beat me, and even extended the hatred to my mother by treating her as slave.

“The worse he did was that I caught him sleeping with his blood sister and threatened to deal with me if I expose him.

“I couldn’t believe my eyes until I read text message conversations between him and his sister on his cell phone which confirmed what I saw.

“My relationship with him in the last one and half years was not friendly and his ways of life didn’t prove him to be a man of God.

“I pray the court to separate us because I can’t cope anymore with the marriage because of his devilish ways of life”.

In his defense, Olusola, 28, denied all the allegations and blamed the plaintiff for the break-up.

He urged the court to uphold the divorce request of his wife and pledged to abide with the judgment of the court.

Chief Mukaila Balogun, the President of the court, dissolved the marriage and gave the custody of the child to the plaintiff.

Balogun further ordered the respondent to pay N3,500 monthly for the upkeep of the child.