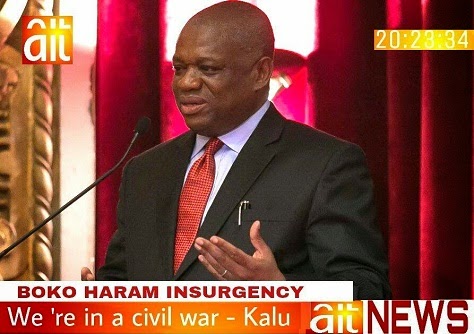 On AIT’s Frontline show this past Saturday, Kalu said Nigeria is faced with Boko Haram civil war. He urged the Federal Government to beg the terrorists because they are humans.

“If we are not careful, Jonathan will be the last president of Nigeria because nobody will take this bombing anywhere, because killing of people everyday means that there’s chaos and nobody wants to be associated with chaos, because it is from this bombing here and there that people will start demanding for independence. It happens but God forbid. We want our country to remain as one and a strong country. Other countries even the European union are expanding their boundaries so why should we allow our country to disintegrate.

It’s not about President Jonathan or who is minister or governor or what have you. It is about the nation. President Jonathan does not own this country; neither are the ministers the owners of the country. The country belongs to all of us collectively so we must come out openly as we are coming out now to solve the problem of the nation: to be able to reach out to Boko Haram formally and informally.

This is what I have always said. It’s not about the government. Business men own this economy. In the US, do you hear people talk about Obama? All the billionaires they don’t know who Obama is. They don’t even reckon with him because the economy is stabilized. People are talking about only three things: the economy, the economy and the economy. So I want people to come together, we are almost getting there, where the basing of the economy is very good, where the private sector will drive the economy not the public sector.

And this is what I see that Iweala is trying to working out. Most of the political, business and military class, farmers know the root of this insurgency. We must come together and say we must stamp out this insurgency and we will stamp it out.”

Do you agree with him? Should Nigerian FG go and beg Boko Haram after killing over 500,000 Nigerians in the past three years?