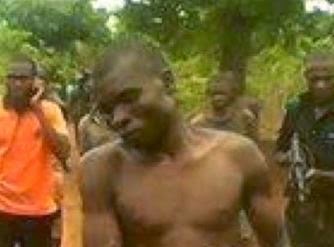 The first case of Cannibalism has been reported in a remote area in Ebonyi state.

A young man identified as Chukwudi Nwode Awam reportedly beheaded his father and ate part of his neck.

According to police report, when police challenged him, he waved the cutlass he used in chopping off his dad’s neck threatening to kill anybody that comes near him.

The 30-year-old Cannibal man was overpowered and arrested.

“He was seen eating the entire stub of the neck. So when you look at the exhibit, the head doesn’t have the neck even though he did the beheading from the base of the shoulder. You will not see the part of the body that is supposed to be the neck; he ate it up” – said Ebonyi Police spokesman, Chris Anyanwu