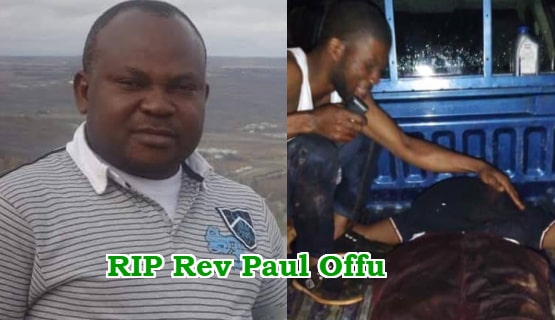 Catholic Priest Murdered By Herdsmen In Enugu Buried  Amidst Tears

Offu’s corpse was brought to the church premises around 9am, where he was buried after a requiem mass officiated by the Catholic Bishop of Enugu Diocese, Most Rev. Calistus Onaga.

Onaga said the death of the priest had sent a message not just to the people of Enugu State, but to the entire country and the world.

The bishop charged Christians and all Nigerians to realise that the responsibility for security of the country was not just for those in power, but for everybody.

While commending the governor and the security agencies for their efforts in arresting the killer herdsmen, Onaga pointed out that God answered the prayers of Christians on the priest’s murder.

He advised priests and residents of the state to avoid unnecessary movement after 6pm.

In a sermon, the Parish Priest of the Holy Innocent Parish, Amagunze, Nkanu East, Very Rev. Fr. Sylvester Nwodo, lamented the continuous attack on priests, saying the diocese had to bid farewell to another priest some weeks earlier.

He described Fr Offu as an active pastoral priest, a game changer, a man of charisma and a soul winner for God.