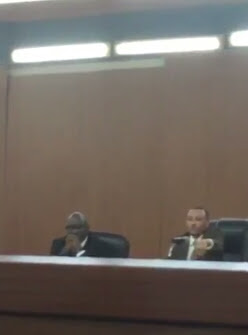 There was a mild drama at the Code of Conduct Tribunal, CTC on Thursday morning as the Chairman of the Tribunal, Mr Danladi Umar was barely prevented from sending Rapheal Oluyede, one of the lawyers to the Senate President to prison for contempt following argument over the motion filed by the Senior Advocate of Nigeria.

The lawyer close to Saraki had reportedly filed an application asking the Tribunal Chairman to disqualify himself from hearing the suit of false assets declaration against the Senate President on the basis of an alleged ongoing investigation by the EFCC.

The lawyer had in the petition argued that Mr. Umar is likely to be biased against his client since he is being probed by the anti-grant agency which is also in the vanguard of prosecution of Saraki.
Oluyede, who has not been among the over 80 lawyers of defending Saraki this morning rose up and told the Tribunal that he has an application to move before the commencement of the proceedings for the day. But the Chairman of the Tribunal said he is not aware of any application.

He had barely finished speaking when Rotimi Jacobs, the prosecution counsel rose up to say he was served the application yesterday.
Jacobs said he has asked Kanu Agabi, the lead defence counsel if he filed any such motion and he said he did not. As such, Jacobs said he did not accept the motion.

The prosecution counsel also said Oluyede is an interloper as he has not been part of the defence team all along.
“This application, I only received it this morning, it is not ripe for hearing unless the lead counsel say something about it. I know that the application was based on false premise, EFCC has already cleared you on 5 March, 2015.

“This motion was filed by mere busybody practitioner. It was not accepted. The business of this day is for the continuation of the cross examination,” Jacobs said.

At this stage, Mr Umar interjected asking: “Is he not the one that sued me that I was undergoing trial by EFCC?”. Jacobs answered, “That was why I asked your Lordship to be patient with me. The business of the day is for cross examination, the application is not ripe for hearing.”

Mr. Umar then turned and faced the defence team being led by Ademodun (SAN) asking how they allowed someone who is not a member of their team to file an application. “How can you allow such a rubbish thing to happen?”, the Chairman asked.
At this point, Oluyede stood up and grabbed the microphone.

He was cut short by Mr. Umar: “Sit down, I am not talking to you.” The CTC Chairman continued his up braiding of the defence team: “How can you allow such thing to happen when you know that motion, he filed it as his own. The motion is thrown out, it is of no consequence. We are here for justice, why should we allow this kind of thing that will derail justice. How can you allow such thing to happen, it is shameful,” the obviously angry Mr Umar said.

Abiodun Adelodun, the lead defence counsel intervened, asking the CTC Chairman to calm his anger. He also added that it is an elementary principle of law that an application may be useless, it for the counsel to file and it is for the court to rule.

He also said as far he knew Oluyede is part of the defence team. Mr. Umar replied that he has thrown out the application. But Oluyede will not be restrained again as he stood up and grab the microphone, thus eliciting another order of sit down! sit down! sit down! from the now obviously very incensed Mr Umar.

But Oluyede refused to yield to the instruction, telling the CTC Chairman that a lot of things is wrong with the way he has been handling the trial and he will not be allowed to continue.
Mr. Umar threatened that he may commit the lawyer to prison for contempt if he refused to abide by the order to sit down. “You will commit me for contempt for doing my duties?” Oluyede asked.

“Where is the Police here? Take him away” Mr Umar directed. As a Policeman was making his way towards the lawyer, his colleagues appealed to him to sit down.
The lot then fell on Jacobs to calm frayed nerves. “My Lord, I ma sorry. It is very good for the counsel to express his mind. The business of the day is cross examination. That motion is not even yet ripe for hearing. We handle him at Federal High Court, we will do so here,” Jacobs said.

Meanwhile the trial has continued with the Senate President in the dock where he has been spending most of the working hours since Monday. The defence is continuing its prosecution of the Micheal Wetkas, the first prosecution counsel.