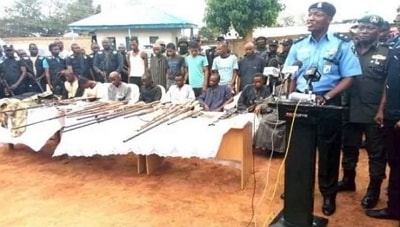 Police have nabbed a self-acclaimed leader of kidnappers operating in Niger state.

The suspect, 63-year-old Maitarari Isa Saidu, a father of 29 children, married to 3 wives said he switched into car theft business because kidnapping had become too risky.

35 stolen vehicles and 5 AK47 rifles were recovered from the kidnap kingpin who operated in Abuja, Yobe, Kaduna, Niger and Zamfara highways.