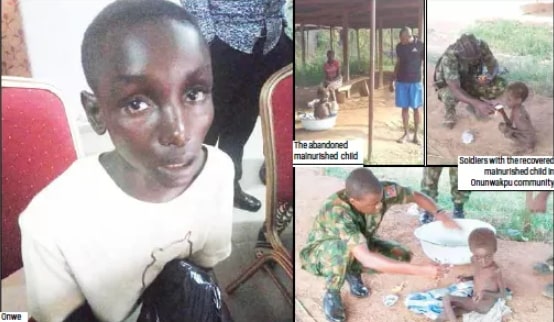 Peace has returned in the protracted boundary dispute between the people of Igbeagu, Izzi Local Government Area of Ebonyi State and their neighbouring Ukelle, Yala Local Government Area of Cross River State. The crisis claimed lives with properties worth millions of naira destroyed, but children abandoned by their parents and relatives while running for their dear lives appear to be still missing. UCHENNA INYA, in Abakaliki, reports on the rescue of two of them who look malnourished.

By the time the two neighbouring communities finished unleashing mayhem on each other, over 20 lives were lost, many houses and other valuable properties destroyed. One of the soldiers deployed to the war zone to prevent further breakdown of law and order reportedly got missing which made the soldiers to invade Ogbodo and Onunwakpu communities over the missing soldier who has not been found till today.

Residents of the two communities; Ogbodo and Onunwakpu, have deserted their areas following continued invasion of the two communities over the missing soldier. The people of Igbeagu and Ukelle had crisis in 2005 over boundary matters. The crisis however resurfaced in June this year when over over 20 lives were lost and many houses burnt by the warlords.

The National Boundary Commission(NBC) and Minister of Interior visited the communities to find lasting solution to the crisis but to no avail. Governors of the two states, Dave Umahi and Ben Ayade met and took drastic decision which douse the tension in the communities. Also, Chief of Army Staff, Lt. Gen Tukur Brutai, donated 12 combat bikes to soldiers stationed in the war zone to enable them access remote areas and respond in emergency situation.

But one of the soldiers deployed to keep the peace, Oluwabukunmi Fadoju reportedly got missing on September forcing troops from 24 Support Engineering Regiment Abakaliki to embark on search parties for the missing soldier. The soldier reportedly got missing on September 17. It was during the search for the missing soldier that a child of about seven years was rescued by troops. The child looked very malnourished and was dumped inside a basin.

The child was discovered in Onunwakpu market by the troops. The child was locked up in an uncompleted building in the area. The child was seated under a charm and was picking leaves from the ground to eat when the soldiers met him. The troops burnt the charms, gave the child some banana and biscuits to eat and thereafter took him to a Medical Reception Station for treatment.

When contacted, the Commandant of Nkwagu military cantonment, Lt Col. S. Sadiq, said the discovery of the abandoned malnourished boy was part of humanitarian services of the military to troubled communities. He noted that the child has been handed over to the appropriate quarters for adequate attention.

According to him, the missing soldier has not been seen. A 16-year-old boy from Ndiekpe Enyigba, Abakaliki Local Government Area of Ebonyi State, Festus Onwe, who was taken to the Igbeagu community by his sister to live with her there narrowly escaped death when the war broke out. He was almost killed by the warlords when he was abandoned by his elder sister who told him to look for way of escape, that she can’t be running for her own life and at the same time trying to save his own.

Onwe broke one of his legs running for his dear life. He is now walking as a physically challenged person.

Photos: Toyota Corolla Car Loaded With 44 Rifles Caught During Stop & Search Operation In Niger State
South Africa Cannibal Who Surrenders To Police Because He Is Tired Of Eating Human Flesh Jailed For Life