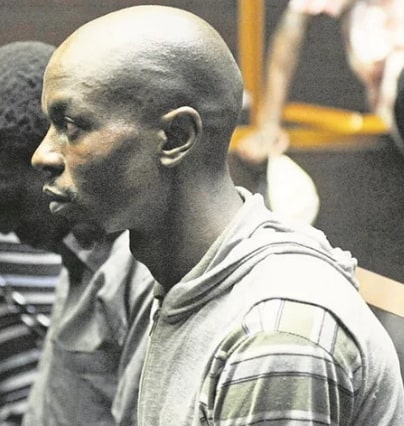 A young South African man who walked into a police station and confessed he was fed up with eating human flesh has been caged for life. Nino Mbatha horrified cops by pulling a woman’s severed hand from a pink school bag, triggering the grisly discovery of more body parts of a young mum.

Mbatha and his sidekick Lungisani Magubane, both 32, were found guilty of murdering 24-year-old mum Zanele Hlatshwayo in Estcourt, South Africa. Both were said to have eaten parts of her body.

A third man, Khayelihle Lamula, 32, was acquitted due to lack of evidence.

Judge Peter Olson jailed Mbatha and Magubane for life after declaring an impact statement by Zanele’s mum was one of the “most meaningful” he had ever come across.”

He dismissed an appeal application by Mbatha at Pietermaritzburg High Court, saying there was little chance of it succeeding, reports news site IOL.

Magubane said he was going talk with his family before making a similar application.

A fourth man arrested and charged with them, Sithembiso Sithole, 31, died in prison after apparently killing himself while awaiting trial.

Local councillor Mthembeni Majola said: ‘They showed us the body parts in one of the houses. They admitted that they were waiting for the body parts to attract maggots.’

Mbatha was said to have told them ancestors insisted that blood needed to be spilt. Lamula reportedly later found Zanele drunk and she got into his car.

He then picked up his co-defendants and drove to a secluded spot where Mbatha killed Zanele, prosecutors said.