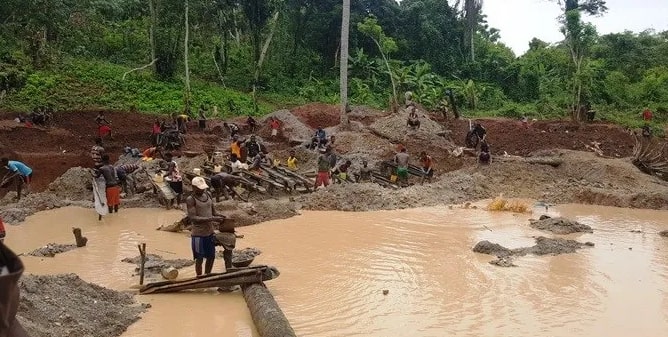 3 Chinese expatriates on Monday afternoon were abducted by gun men at a mining site in Ijoka village near Itagunmodi in Atakumosa West Area of Osun State.

It was gathered that the gunmen stormed the site and started exchanging gun shots with the police team providing security for the Chinese and reportedly killed one police orderly before they could carry out the kidnap.

It was gathered that an expatriate, who attempted to escape on sighting the hoodlums, was shot and injured.

The victim was said to be receiving medical treatment at the Obafemi Awolowo University Teaching Hospital, Ile-Ife, where he was referred after first attended to at the Wesley Guild Hospital, Ilesa.

Meanwhile, the Osun State Police Commissioner, Mrs. Abiodun Ige, had led police team to the scene of the abduction.

Mrs. Ige confirmed the killing of the police orderly to newsmen, saying her men are combing the bush where the incident happened to apprehend the bandits.

On May 2018, the traditional ruler of the gold-rich Itagumodi, the Alagunmodi, Oba Michael Ojo Famadewa, was kidnapped but had to pay N1.7 million ransom before he regained his freedom.

According to the monarch, he was humiliated and horsewhipped by his abductors.