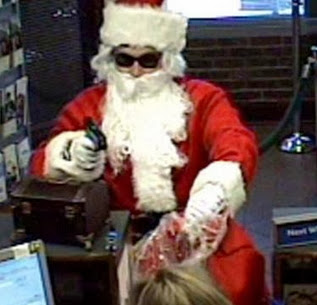 A man dressed in Santa Claus outfit robbed a SunTrust Bank in Florida around 3:13pm on Christmas Eve. The fake Santa passed a note to the teller demanding money. He carried a gift-wrapped package in the bank around 3:13pm. He insinuated that the parcel was harmful, said Assistant Chief of Police Wayne Miller.

After getting the cash, the suspect left the package on the counter and walked out. He was seen fleeing in a dark-colored vehicle.

The bank was immediately evacuated and the Volusia County bomb squad determined that the package wasn’t an explosive device, Miller said.

The holiday getup is the first one Miller said he’s seen a robber wear.

“We usually see costumes worn during Halloween, but I’ve been here 29 years and I can’t recall something like this,” he added.

Santa-like costumes have been used as holiday disguises in other bank robberies across the country. This month, an armed robber wearing a Santa hat and shades held up a Bank of America in Dundee, Mich., while a man in a dirty gray beard robbed a PNC Bank on Saturday in Laurel, Md.

PNC tellers described him as a criminal Kris Kringle, although local cops said he could have been disguised as someone from the reality show, “Duck Dynasty.”

The SunTrust Bank suspect is described as a white male, 6-foot, with a medium build. Anyone with information is asked to call Port Orange detectives at 386-506-5895.