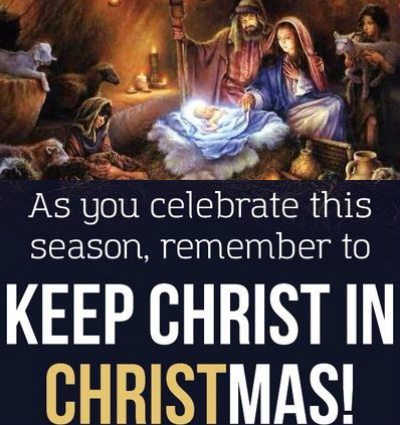 December 9, 2017 – Christmas, A Necessary Birth: How Pope Julius I Declared 25th Of December As The Birthday Of The Lord Jesus Christ Around 350 AD

Throughout the world, Bible scholars as well as critics have accepted the realities of Jesus’ birth and death as two uncontested facts about his life.

But the same cannot be said about his supposed birthday, a date that almost every scholar has practically discarded.

Virtually every Christian today tends to agree with the idea that Jesus was not necessarily born on 25th December, AD 1. It is almost certain that this accounts for why over the years; experts from all walks of life have not ceased to hypothesize his actual birthday.

Professor emeritus of biblical studies, Joseph Fitzmyer, argued that “…though the year of Jesus birth is not reckoned with certainty, his birth did not occur in AD 1…” as is generally believed.

Statements like this led to countless hypotheses. For example, the Deaschen, believed to be written in 243 AD, puts Jesus’ birthday on March 28th. Clement, the Bishop of Alexandria c 215 AD, decided it was November 18th. Based on what he attributed to historical records, Fitzmyer himself choose September 11th and so on.

Now the very fact that Saint Mark, who is unanimously agreed to be the earliest gospel writer, having written his book around 65 AD, failed to talk about a date but rather began his narrative with the baptism of an adult Jesus, is suggestive of the fact that the early followers of Jesus either lacked interest in, or did not know the date of his birth.

But away from speculations, fact is, it was Pope Julius I that declared 25th December as Jesus birthday around 350 AD.

Having converted many pagans, the Universal Church then began to change certain pagan festivals like the brutal Saturnalia, which was part of the pagan Winter Solstices festivals, into Christian ‘Holy Days’ -holidays.

The Church also promised the converted pagans that they could continue to celebrate their festivals, with the intention of gradually replacing these festivals with Christian ones. Even though there was nothing Christian about these end-of-years, week long festivals, the Church named the final day of festivities, which is 25th December, ‘Christ-Mass’ day.

Because the first Christmases did not get the full participation of the pagan converts, church authorities decided to allow the holidays to be celebrated more or less like the Saturnalia festivities.

This is why the earliest Christmases were celebrated with drinking, sexual indulgences, singing naked on the streets and so on, like the Saturnalia that it replaced.

Somehow, apart from giving gifts and all the other practices that goes with Christmas, don’t we still see some type of licentious celebrations today in Nigeria during the yuletide?

Now there are those in Christendom, like the Jehovah’s Witnesses –although they frown at being grouped among Christendom- who insists that we should not celebrate Christmas because of its pagan origin. Well, they attend their meetings on ‘Sun Days’, a day which gradually shifted from Sabbath to the first day of the week after the resurrection of Christ, so? We know that all the days of the week and months of the year are named after pagan gods. Saturday for example is Saturn’s Day, yet no one thinks of it and all the other days and months as such anymore.

The stories behind almost all pagan holidays -and in fact most practices in the world today- developed from one ‘pagan’ idea or the other, with its own set of stories. Bottom line is, all these stories have been replaced and forgotten, just as the root that lie beneath the celebration of Christmas is so forgotten that the present meaning does not carry the pagan connotation anymore.

In any case, all languages and ideas have their ‘pagan’ roots somewhere lost in time, should we because of that discard them? No. Christmas has a new meaning for us today, and that is what matters.

Some argue that the essence of Christmas -which is giving- has been lost, and the birth of Christ has been commercialized and corrupted. Well, the world we live in corrupts everything and I don’t recall throwing away my pot because while boiling rice in it the rice got burnt, or throwing away my laptop because someone sent a bad email with it.

Others say it was not written in the bible; that Jesus, even though he asked us to commemorate his death, did not ask us to do the same with his birth. Well, these same Christians use computers, mobile phones, musical instruments and so on, yet I don’t recall where Jesus commanded us to use those things in the Holy Bible.

Who created all the days in the year in the first place? Now, what is wrong in picking one of the days Jesus created, taking it from a false pagan god to celebrate the Creator’s birth? Where is it ever compulsory that we must celebrate a person’s birth on the exact same day he was born? Americans for example, celebrate Washington’s Birthday every third Monday of February, yet the man was born on 22nd February.

We must understand that the great Roman Catholic Church had good intention when they assimilated the pagans into the Christian fold and tried to blend them in, and every culture reflects a part of itself in its mode of worship.

Though Jesus was not born on 25th December, Christmas is still worth celebrating, especially if we do it in the proper fashion. We know whom we serve; we know what is on our minds as we celebrate.

The date is immaterial, we should focus instead on the deep spiritual truth that the birth of Jesus Christ symbolizes and why it was a necessary birth, rather than bicker over what date to celebrate it or what celebration it replaced.

Jesus was indeed born, he lived his life to bring hope to countless people, he is God’s Incarnate, and while on earth he was divinity personified in its purest form.

For the briefest of moments in Israel some 2000+ years ago, when he strode the byways of that desert land, for 33 years there was the presence of Heaven on earth, so that men felt and caught glimpses of Heaven. And by his example and message, he showed us that we could through him, call God ‘Father’. That selflessness rather than the bully-boy mentality can and should dictate the way we interact with one another. And more importantly he showed us that because of his birth, we could be reunited to God from our fallen state.

I think this more than anything else should be the focus of this season. We were lost and God infused into mankind a portion of Himself in order to redeem us.

There are still many, this author inclusive, who, every once in a while, fall slave to their senses. We mortals are desire-ridden. We are immersed most times in a senseless pursuit of materialism and vanities.

His birth was not only necessary to free man from these vices but to show man that part of the almighty God that has been shielded from man for centuries. Therefore, like his birth infused a portion of God into human affairs, as we celebrate him this season, we must allow the Christ-spirit to be birthed in our hearts too, going forward, because this is the best Christmas gift of all.

Like this author who used to be skeptical, skeptics can use this season as an opportunity to reappraise their thinking about the person of Jesus with the intention of knowing him better.

This season should evoke deep humility in us because deep spiritual rebirth comes only to the humble, to those who open their arms wide like a child who puts all his trust in an adult and desires for the adult to lift him into his warm embrace.

This is the right Christmas attitude yet… how many Christians in Nigeria today even knows Jesus for real?

About the author: Albert Afeso Akanbi is a Novelist, Researcher, Columnist and Humanitarian. He has three novels, a number of short stories and articles to his credit. He lives in Abuja FCT, Nigeria.

Fulani Herdsmen Kill 10 Kogi Villagers After Farmers Stopped Them From Grazing On Their Farmlands
Pastor Abiara To Christians: You Don’t Need To Know What Your Tithe Is Used For, Leave It To God’s Servant