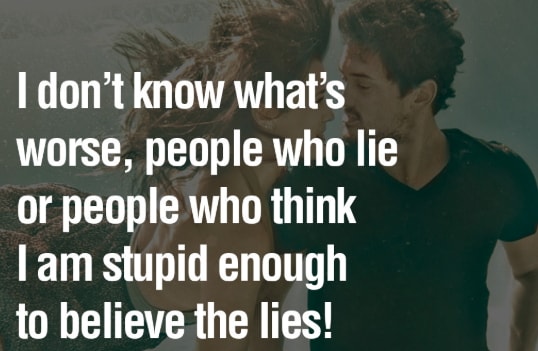 Common Signs Of A Deceitful Man: How To Know If Your Husband Or Boyfriend Is Deceiving You

It occurs naturally that humans are  found with all kinds of immoral attitude such as deceit, hatred, selfishness and other immoral practices, and this is more rampant where people do not have respect or regard for one another.

It’s human to be deceitful and it’s easy to find out if someone has this character with a lot of signs. It occurs too among leaders in communities, organizations, and everywhere. It also occurs in government offices where leaders manage resources deceitfully and turn into money looters eventually.

This character is suspected with time as it gives its signs obviously. Sometimes, it’s worrisome to find someone with the attitude of being deceitful especially if found in the position of a leader. The deceitful ones do it intentionally and become adamant in doing it until it becomes known to the people around them.

What are the Signs of a Deceitful Man?

In suspecting a deceitful man, you should consider the following factors:

Lying is one of the signs you would see before you’ll start being suspicious that someone is deceitful. One thing should be avoided and discouraged, and that is, guessing or assuming that someone is likely to be who he might not be.

But when someone is habitually found with a suspicious character like telling lies, or not disclosing the truth when he’s expected to do so, we say he’s a deceitful man. We see someone like that as an untrustworthy person; someone we cannot trust for his bad character.

If there is a certain responsibility that’s supposed to be assigned to him, it will rather be given to someone else due to his well-known characters. He’s known as a hypocrite, and, no degree of trust will be placed on him.

For instance, when I started a white collar job a few years back, I had this boss in the office that was so addicted to lying especially when it comes to financial issues. He continued with the habit for several years until he lost his job eventually. He was in control of finances at all levels but got dismissed for funds looting.

From the example I narrated above, the act of being deceitful was suspected first in the man when he was to prepare the records for the end of a particular accounting period, and loopholes were found in the statement he presented. These loopholes were discovered by the company’s external auditors. Thus, in a deceitful man, an element of lie can be found.

The character of a deceitful man is equally suspected in his habit of being inconsistent, unpredictable, inconstant, irregular, uncertain, turbulent, unstable, volatile and unsettled. When you see these similar characters in a man, you’ll know that he’s such a deceitful man and must be treated as such.

Like liars, an erratic man is loaded with inconsistent habits and people quickly notice this in the course of dealing with such a man one way or the other. It’s always known. It can’t be hidden just as the smoke of a cigarette cannot be hidden from anyone. That’s what the character of an erratic man Is likened to.

If an erratic man happens to be in a leadership position, people will be frustrated and no one under him will ever make progress. Erratic men are fond of saying “A” today, and it becomes “B” tomorrow. If they’re challenged, they’ll bluntly deny that they ever said “A”. People don’t make progress under such men.

And if he’s a husband in a household, the wife and children will bear the consequences. They are not fit for any form of leadership positions, be it in the society, communities, groups and elsewhere. They’re so frustrating and people move away from them within a short period of time.

I’ve seen cases of marriages that broke up due to an erratic character on the part of the husband. Imagine a situation whereby a man would draw a plan with his wife in a day on anything pertaining to his home and would still change that the following day due to inconsistency. No woman would ever want to live with such a man for the sake of her children. This is what most people experience today in marriages.

Divorce occurs in marriages due to this character too. Women believe that an inconsistent man would never be an achiever in life and that’s true and realistic. Nature has proved that right and accurate. It’s a proven fact of life that, for a man to be self-actualized, he needs to be consistent and persistent in whatever he’s doing. And this is part of what makes a man.

When you deal with a deceitful man, one of the characters you will likely suspect in him is the habit of misleading other people. Anyone who relies on such habitual men would be misled in life and that could be so harmful.

Sometimes, we may have misleading men as state and national leaders. With such men in control, people’s lives will get frustrated. Some have ruling authority over a lot of people and, people realize eventually that they made a wrong choice. Of course, they are not the right people to follow due to their misleading character. When things are going the wrong way under their control, they see issues as if they don’t know what to do at getting them resolved or fixed, whereas they actually know the right thing to do, but they wouldn’t ever want to do so people can be made to suffer.

If a misleading man is placed in the position of a counselor, he’ll cause so much delusion in the lives of so many people. Deceitful men who have the opportunity to be in such positions destroy lives with their characters.

Inconsiderate men are not like that. They have nothing good right inside them to consider as important. They are destructive. They’re heartless. So, they’re deceitful.

When an inconsiderate man is expected to show compassion for someone, he’ll surely not do that because of who he is. He does not understand the term “Compassion”. So, he doesn’t show compassion for anyone whether in the place of work, in the neighborhood, in the street, and everywhere he finds himself.

Wickedness is another obvious sign you will see to know that someone around you is a deceitful man. Take yourself to be the leader of a nation that is blessed with milk and honey. You’ll be seen by everyone if, under your leadership, over 100 million youths are jobless in spite of all the several industries that could be refurbished to create more employment for the people, then you have an element of wickedness in you.

If you’re the leader of a great nation and you’re not concerned about your youths at all, then you’re a wicked man. You’re wicked in the sense that you’ll lure a large percentage of your youths into the various immoral practices just to look for money at all cost. They will go extra miles to find wealth wherever they can get it, not minding the consequence at all. So, you’re wicked to the innocent children who grew up, graduated, but never got the opportunity to work.

Do you know why people call their leaders deceivers in places where things fall apart? It’s because of the wickedness the people saw in them. An act of being wicked, inconsiderate, being inconsistent, lying, being erratic and misleading is found in such leaders.

Wickedness must disappear in the hearts of men as it destroys a lot of things naturally. If you’ve been in the midst of the wicked people, you’ll find that you can hardly get up among them. So, if you’ve worked with a wicked man, you’ll discover that he’s just nothing but a deceiver. He only pretends as if he doesn’t know what’s doing wrong at all, whereas, he does.

To typically explain who a desperate man is, permit me to say this short story about a desperate man. One day, this man had a misunderstanding with his wife who happened to be an asthma patient and had been like that for a very long time. They never ended the clash before the wife left for work. Unfortunately, she got attacked by asthma all of a sudden on her way to the office. So, she was left with no option other than to call her husband to help her bring her inhaler to wherever she was, but the husband refused to pick all the calls she made. Eventually, she gave up in the process and lost her life on her way to the office.

What type of man would you call your husband? How would you describe him? To be realistic, what name would you give him?

A deceitful man is dangerous. When a man is known as a liar and he’s erratic, misleading, inconsiderate, wicked, and desperate, he’s a dangerous person and should be avoided among men.

Kenyan YouTuber Lisa Gaitho Reveals How She Pleases Her Nigerian Husband, Tells Women To Do Same
Signs of a Deceitful Wife, Woman: How To Know If Your Partner Or Girlfriend Is Lying, Deceiving You