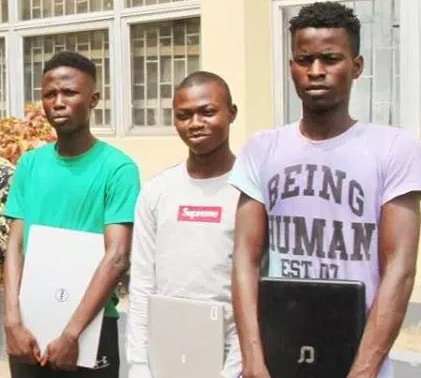 Confession Of Yahoo Boys Arrested For Cultism: Facebook New Security Measures Has Made It Difficult To Make Money

3 suspects arrested for online scam called Yahoo Yahoo, have said it has become difficult to make money from the venture because of security measures adopted by Facebook management.

The suspected fraudsters,  Ohis Destiny, Nelson Aiogba and Destiny Osagie said many accounts they opened for Yahoo Yahoo were closed down by Facebook.

But the police said the suspects were arrested for alleged cultism and illegal possession of firearms while they claimed to Yahoo Yahoo boys.

Ohis, a graduate of Electrical/Electronics Engineering from the Federal Polytechnic, Auchi, Edo State, said he graduated in 2014 and joined Yahoo Yahoo when he could not get a job.

The suspect said his brother introduced him into the “business”.

“I was arrested for cultism and Yahoo Yahoo. I started Yahoo Yahoo because there is no job. I started in January this year. I graduated in 2014 and I have not had a job since.”

Nelson said he graduated from the School of Health Technology in 2017.

“There is no job so my brother introduced me and I started. We use Facebook. I will create an account and use foreign picture. You start chatting and tell the man that you are not allowed to make calls but chatting.”

Continue Reading
You may also like...
Related Topics:business, yahoo