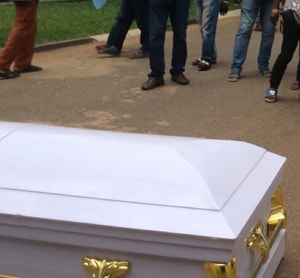 Late Pastor Eromosele was reportedly shot behind close range before his attackers used machete to cut through his skull and all parts of his body.

His decomposing body was found after three days by a search party comprising of hunters, vigilance group and the police.

His burial has been slated for Saturday but residence of Odighi decided to storm the government house to demand for arrest of the Pastor’s killers.

The casket was placed in front of Government house while the protesters sang songs demanding for arrest of the killers and stopping attacks on farmers by herdsmen. 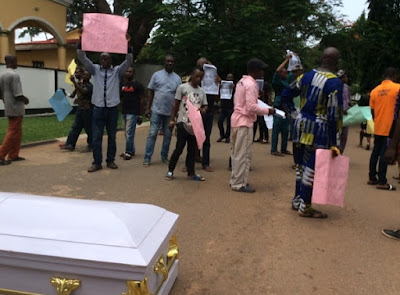 Placards carried by the protesters read, “We want justice for our father”. “Fulani herdsmen that are killing us must be fished out”.

“We need protection and justice.”

Speaking to newsmen, Kingsley Emmanuel, one of the workers of late Pastor Eromosele who narrowly escaped being killed, said two herdsmen stopped them at the farm with guns.

Kingsley said the herdsmen showed them a man in a photograph as being the person that sent them to kill Pastor Eromosele.

He said the herdsmen collected the sum of N31, 500 and asked the late Pastor to call his wife for ransom payment.

According to him, “After they beat us with sticks and guns, my oga called his wife around 5pm and told her what happened. They said she should bring N4m but later reduced it to N2m.

“They took us to another place and tied my oga down. My oga was begging them but they refused. My brother Akpan was cut on the hand but he managed to escape.

“The next day, they said they wanted to kill us since my Oga wife did not bring money. After my Oga begged them, he told his wife to keep the money and used it for his burial.

“They used cutlass to cut my hand and shoulder but my Oga told me to run so I ran but was very weak so I slept in the bush.”