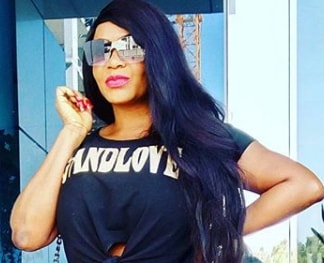 The once head-turner who announces her presence at any event with her boobs spilling out of her bra suddenly went quiet. While the event lasted, Cossy behaved herself, looking gentle and tamed. Interestingly, Cossy has shed some weight in all the right places. To the surprise of everyone, the actress dressed decently. For the first time, she would be spotted at an event, wearing something that concealed vital parts of her body.

It was unlike Cossy, and those at the event confirmed that she has really changed, just as they found it difficult to believe their eyes. Even when she was leaving the event venue, all eyes were fixed on her, and Cossy was not bothered. While standing along the ever-busy street, waiting for her colleague, actress Ijeoma Imoh, the busty actress caused a stir as passers-by who recognized her immediately stopped to steal a glance at the actress. However, feeling uncomfortable, Cossy hopped in the posh car that has eyelids on its headlights as Ijeoma sped off!.

Yemi Solade: I Struggle To Get Good Jobs; Nigeria Is Killing Me. I May Relocate To Another Country
Ini Edo Wins Best Actress Award At ZAFAA 2018 As Funke Akindele Becomes Face Of 2018 Edition