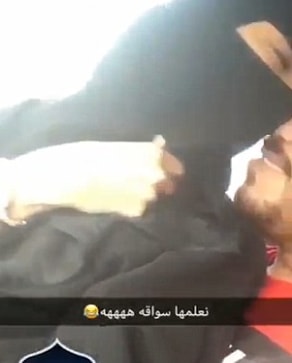 A couple arrested for kissing in Saudi Arabia are now under fire after video of a Saudi man kissing his woman went viral on the social media.

The man who posted the clip online in a caption wrote “teaching her how to drive”.

Police arrested the woman and the man after video posted online showed them in  hot embrace while driving on a highway in the port city of Jizan.

Many Saudis have condemned the couple for showing lack of manners.

The country has strict laws for unmarried couples.