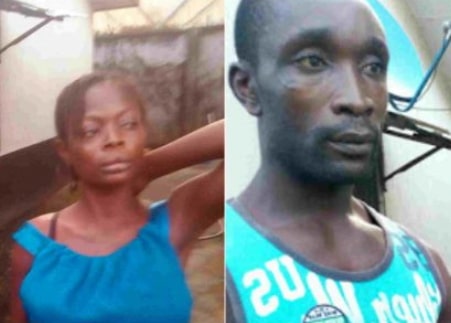 It was allegedly operated by Eucharia Jaja, an auxiliary nurse and her husband, Uche Jaja, a tailor, at Afrique Hotel in Oyibo Local Government of Rivers State.

The police, following a tip-off, uncovered the syndicate, and swooped on young, expectant mothers, who intended to traffick their babies.

Thirteen were arrested. Among them is a couple, Richard and Chidinma Benson, who sold their one-day-old baby to the Jajas for N550,000, to enable them pay their N10,500 debt and relocate from Isiala-ngwa North in Abia State to Umuahia, the state capital.

The couple said they only made N250,000 after ‘settling’ their accomplices.

When asked about the baby, the Jajas said they did not know, as it had been sold.

They added that the latest trafficking was the fourth they had carried out in the last 12 months.

Others arrested are couple, Chika and Rose Onyia, from Enugu State, who linked the Jajas to the buyers.

The Onyias have six children.

Narrating how she got into the business, Mrs. Jaja, from Nkoro in Opobo/Nkoro Local Government of Rivers State said she learnt the trade from her late employer, who was a traditional birth attendant.

She said: ”I have been in the trade for one year. I was introduced to it by Rose, my former employer. She is now late. I worked for Rose, an herbalist who specialised in treating women and expectant mothers.”

Speaking on the involvement of her husband, Mrs Jaja said: “He drives me whenever I am going out for business. He does not see me with the babies because I don’t bring them to the house.

“I have four children. I’ve not sold any of my children.”

Igweh said the command under Commissioner Zaki Ahmed would rid the state of child trafficking and other crimes.

He urged the public to inform the police about the activities of criminals.