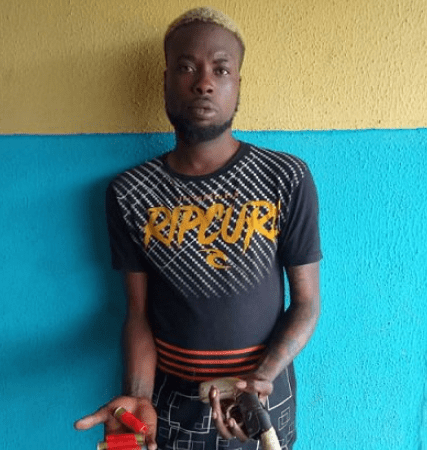 A suspected cultist identified as Oluwaseun Fakoyejo has been arrested at the main bowl of the MKO Abiola Stadium, Abeokuta, in connection with plot to disrupt the inauguration of Governor Dapo Abiodun on May 29, 2019.

The Police Public Relations Officer in Ogun State, Abimbola Oyeyemi, in a release, stated the arrest of the suspect followed an intelligence report available to the state Police Command that some hoodlums had planned to position themselves at the stadium, venue of the inauguration purposely to foment trouble.

Abimbola, a Deputy Superintendent of Police (DSP), added shortly after the departure of the Governor and some dignitaries, the Special Anti – Robbery Squad (SARS) operatives at the venue got wind of threats to people with dangerous weapons by the suspect other miscreants and arrested him.

According to the Police spokesman, the operatives succeeded in arresting 31-year-old Oluwaseun while others escaped.

He noted that a local single barrel pistol and four live cartridges were recovered from the suspect.

Woman Stages Her Own Kidnap To Raise Money To Travel Out With Boyfriend
Lagos Business Woman Brutally Stabbed By Housemaid In Ejigbo Lagos Dies..RIP Mistura Ogundipe