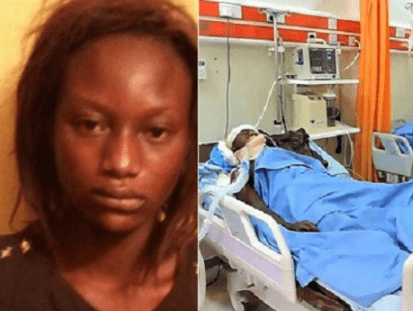 A Lagos-based businesswoman has lost her life after battling with injuries she sustained 15 months ago when she was attacked by her 18-year-old housemaid, Susan Samson, in Lagos.

The source also said that the deceased was buried on Friday at Atan Cemetery in Yaba, Lagos in accordance with Islamic rites.

The domestic servant, simply identified as Susan, had on March 3, 2018, allegedly attempted to kill her boss, at her Ejigbo residence in Lagos by pouring blended pepper on her and hitting her head with a champagne bottle after her boss discovered that she had been stealing from her.

Ogundipe was rescued by neighbours who jumped into the compound after they heard her scream and saw blood flowing through the gate of her house.

She was said to be in coma for three days at LASUTH before she was finally revived after a three-hour surgery.

NAN reported that the deceased had been a frequent visitor to the hospital for check-up and treatment, following the injury she sustained.

“She was later admitted after much complication and remained hospitalised in the past six months during which she eventually gave up the ghost,’’ the source told NAN.

The deceased had, on the day of the incident ,got in touch with the agent who brought the maid that she no longer required her services.

The maid who did not want to leave the house, allegedly panicked and attacked Ogundipe.

The maid quickly went into hiding but was located and arrested by some members of Oodua People’s Congress (OPC).

She allegedly confessed to the crime and was subsequently handed over to Ejigbo Police Division.

The housemaid is currently facing attempted murder charge before a court in Lagos.