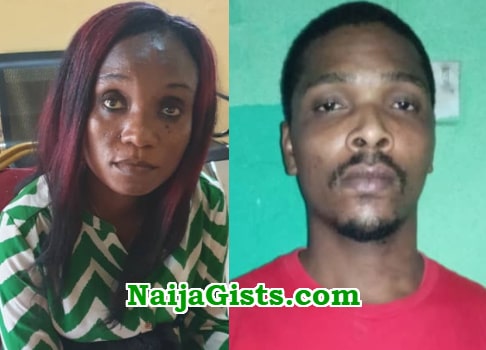 By Ebele Boniface, The Nation

A woman identified as Chizoba Ogbonna, have been arrested by operatives of the Inspector General of Police Special Intelligence Response Team, IRT, in Abriba-Ohafia area of Abia State, for staging her own kidnapping.

The suspect, a 36-year-old mother of three and a native of Osisioma, in Abia State and a graduate of Alvan Ikoku Federal College of Education, Owerri, Imo State, was arrested alongside two others, Uche Anthony and Joseph Ezema, who assisted her to stage her kidnapping as well as to negotiate her ransom.

Our source disclosed that N500, 000 was paid through Ogbonna’s bank account as ransom, before the IRT operatives swooped on them.

It further disclosed that one of Ogbonna’s relatives alerted the Inspector General of Police Adamu Mohammed, about her abduction and the subsequent demand for N2million as ransom, stating that her kidnappers had threatened to kill her within hours if their demands were not met and IGP swiftly deployed a crack team of operatives from the IRT, headed by Deputy Commissioner of Police, Abba Kyari, to track and apprehend the suspects.

The source further disclosed that the operatives, who were armed with advance tracking devices, trailed Ogbonna and her supposed kidnappers to an uncompleted building at Agborji Community in Abriba-Ohafia area of the State with the intention of rescuing her and apprehending her kidnappers, but the operatives got shock of their lives when they arrived the hideout and discovered that Ogbonna was having a romantic affairs with one of her supposed kidnappers and her abduction was staged so as to extort money from her relatives, which she intended using in traveling out of the country with her boyfriend.

In a bid to safe herself of any complicity, Ogbonna, in an interview denied staging her own kidnapping stressing that she was hypnotized, whisked away in a vehicle and later found herself in the home of her boyfriend Joseph Ezema, who she said contacted her family and demanded for the ransom.

“I am a primary school teacher, but I was formerly married and I had three children with my former husband, but I don’t love him and it was as if he held me with a charm.

“I left the marriage when I realized myself. In 2018 I met Joseph on Facebook and he told me he is a fashion designer. Later I told him that I have some jobs for him and from that point we started a relationship.

“At one point in our relationship we discussed about traveling out of the country and he told me that he had once spent around N300,000 for a travelling visa and it didn’t work out for him.
So, on the 13 march, 2019, I was on my way to visit my sister and a vehicle stopped in front of me and I saw six persons in it and a lady inside the vehicle called me and when I responded she asked me to enter the vehicle and I lost control of myself and she asked me to enter into the vehicle and I obeyed her.

“I later found myself in the home of my boyfriend in Agborji, then my boyfriend took my phone and called my sister and started demanding for ransom and when my sister spoke with me, I begged her to pay the ransom that my boyfriend was demanding.

“I then sent my account number to my sister and she paid N500,000 into the account, two days after the money was paid the police came and arrested me and my boyfriend.”

But her 30-year-old boyfriend, Joseph Ezema, debunked her claims that she was hypnotized and kidnapped as he narrated how he met her and how she brought the idea of kidnap so she could raise money that they would both use in travelling out of the country.

“I have just a secondary school leaving certificate and I am not married and I don’t have children. I was arrested because I faked the kidnap of my girlfriend. I met her sometime in April 2018, she is one of my friends on Facebook and she was always commenting on my photos and we started chatting and then we started dating.

“She told me that she was a divorcee and that her husband use to beat her and he wasn’t allowing her to have friends and there was also a day the man came home with another woman and everything became complicated for her and she decided to move out of her husband’s house.

“So, she told me that she would want me to kidnap her and call and demand ransom from her sister and we will use the money to you travel out of the country. We then traveled back to my town in Abriba and she came with a blue phone with two sim cards.

Then two days later, she covered her phone with a cloth and called her sister, pretending to be a kidnapper and she informed her sister that she has been kidnapped and she demanded for ransom. Later on, she got scared and thought that her sister would recognize her voice, then my friend Anthony took over the phone and he started negotiating with her sister. After two weeks of negotiations, her family paid N300, 000 into her account and she asked me to be patient that more money will be paid into her account.

“So on the day we were arrested, her family paid an additional N200,000 into her account and they said that was all they could afford and she gave me N100,000 as my share but the police came and arrested me. When I was arrested I told the police that I am not a kidnapper and that it was my girlfriend who lured me into trouble”.

Continue Reading
You may also like...
Related Topics:boyfriend, herself, kidnap, money, out, raise, travel, woman