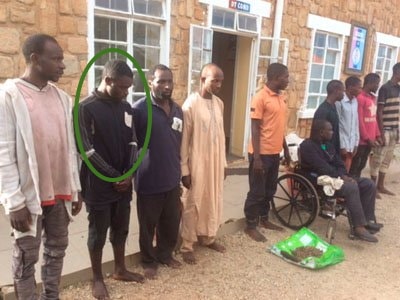 2 suspected robbers, Ramon Adedepe 15 and Taheed Kareem 17 have confessed that it was their friends namely ‘Dangote’, Femi and one Emmanuel a.k.a. God with us who they usually meet at Indian hemp joints at Iba area of Lagos that lured them into phone snatching and other petty robbery.

The two suspects made this confession on Thursday while being paraded by the commissioner of police, Cp. Hakeem Odumosu, at the command headquarters, GRA, Ikeja, Lagos.

The police said the suspects were arrested following intelligence report on their nefarious activities in Iyanoba area of Lagos especially snatching of people’s phones and hand bags on the streets and roads in the area.

In his confession Ramon said;

“I was arrested on the 27th February, 2019 at about 4:00pm by operatives of the Special Anti-Robbery Squad (SARS) , Lagos state police command.
My mother and father are late and I managed to finish Senior Secondary (SS3) and went and learnt Vulcanizing work. I could not further my higher education because I had nobody to sponsor me.

The machine was the biggest huddle to my starting vulcanizing work. I had even secured where to do it, at a very good road junction within my area but I could not start because I had no pumping machine.

In my desperation to survive I started making friends with people who assist me to survive like giving me money for breakfast, lunch or dinner.

I also got bad influence from some of the friends I made like those who made me to follow them to marijuana joints where I followed them to smoke weed.
It was the Indian hemp smoking that gave me the courage to follow them to go and work. The work is phone and loaded bag snatching.

My first work or operation with them I got N5, 000. They used to tell me that the money is for eating and changing of cloths.

I paid N20, 000 to learn vulcanising work but what they gave was not encouraging. If I get my freedom I will not join robbery gang again.

Confessing, he said it was the bid to get money to open his own barbing salon that made him to join the robbery gang but insisted that his phone and bag snatching gang does not operate with gun whether English or locally made guns.

He said his gang cheated him to the point that he had made up his mind to leave the gang before he was arrested.

He advised his fellow youths to avoid the company of those who indulge in hard drug taking so that it would be difficult for anybody to lure them to any type crime.

He revealed that it was his bad habit of smoking hard drug that blinded him when the bad boys came to lure him into robbery in Lagos.