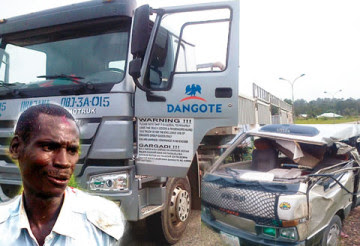 Not The Actual Pic

A 16-year-old girl identified as Cynthia Nikoro was crushed by the trailer while she was attempting to cross the popular Auchi Okene Expressway in Edo State with her family.

According to eyewitnesses account,  while her family members were waiting for the highway to clear, the victim suddenly ran ahead of them. She was knocked down by the speeding trailer and declared dead on the spot.

The driver escaped from a angry mob while they were planning to lynch him.

The body of the victim had been taken to a mortuary in the area by Federal Road Safety officials.