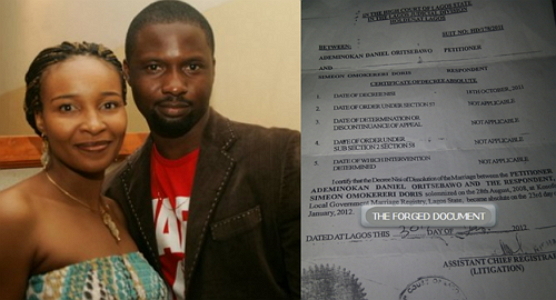 The messy divorce and marriage problem between Nollywood movie producer Daniel Ademinokan and his ex-wife actress Doris Simeon is getting messier daily.

Few hours after Daniel Ademinokan released the photo of his son in order to turn down the media hype his controversial lifestyle is generating, Doris Simeon has started speaking up quietly.

Few hours ago, an allegedly forged court document that Daniel used to divorce his wife a while back has been released.

According to Doris Simeon’s lawyer, the document used in the divorce is fake.

We learnt that Daniel Ademinokan tricked Doris into moving out of their rented apartment in Magodo estate to live with a friend.

He lied to her that he needed to seal some deals in Abuja in order to raise money to pay their expensive rent.

She believed him and moved to her friend’s place.

While putting up at her friend’s place, she was still in good terms with Daniel and she never suspected any shady business, so this was what made it easy for him to come get their son one day, under the pretext that he wanted the boy to visit his grand mum in Randle Avenue. Little did Doris know that he was going to take the boy away that day with no intentions of bringing him back. This went on for a while; she didn’t get to see her son and was at a loss on what to do.

For the past few years, this little boy now lives with his father with no chance of ever seeing his biological mother.

In a bid to quickly separate from Doris Simeon, he took the law into his own hands and handed a fake court judgment declaring that their marriage has been dissolved to her.

Those in the know said prior to the time he gave her the judgment, there was no court summon or complaints alerting her of any divorce proceedings and it shocked her the more because she wasn’t aware of any and never appeared in court. He also told her he had been given full custody of their son. 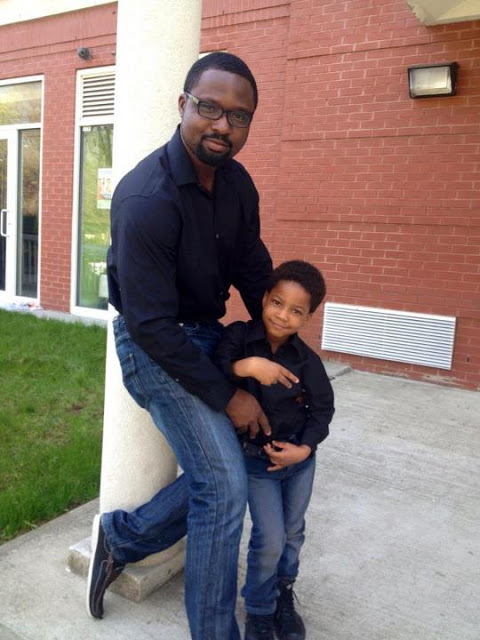 Initially Doris Simeon believed Daniel but as time goes on, she called her lawyer who after tracing the judgment suit number realize that the document never existed meaning that Daniel Ademinokan forged the court judgment document.

As  we speak, the mother of one has asked her lawyer to file divorce papers on the ground of deceit stating that at this junction given his antics, the marriage had broken down irretrievably (which is the only lawful ground of divorce).

The actress has tried everything possible to challenge him on the forged document issue but Daniel never revealed his real address and phone number.

In another development, we learnt the length story that surfaced yesterday was written by Daniel Ademinokan himself in order to rubbish his estranged wife and make Stella Damasus who allegedly snatched him feel good. Read the story here.

As the saying goes… what goes around comes around… Time will tell the fate of Stella & Daniel.

See the photo of Daniel Ademinokan’s forged court document  below 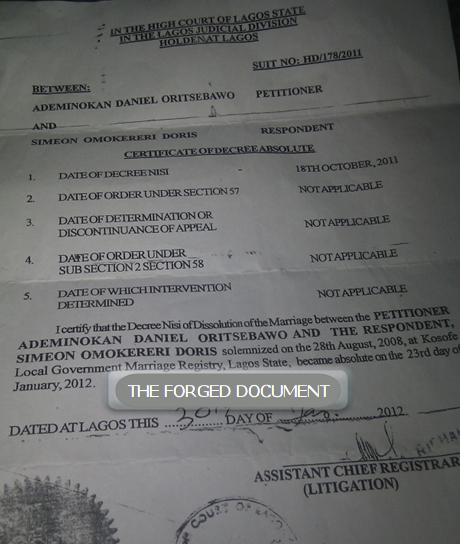