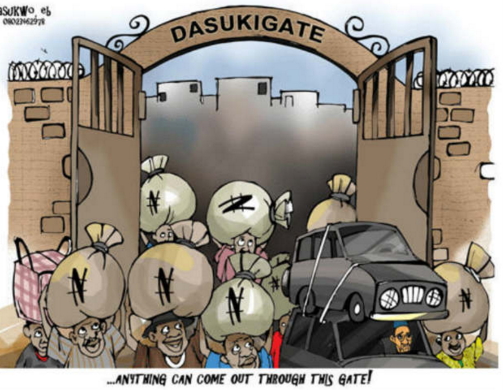 A report today by The Nation said the suspect was involved in the arms procurement contract scandal in the Office of the National Security Adviser (ONSA).

The report also said the EFCC operatives are investigating wire transfers of millions of dollars and pounds made to Niger Republic, United Kingdom and United States.

An EFCC source explained the focus of investigation:

“Already, we are tracking what the funds were used for including payment for technical equipment and supply of vehicles. Our investigation includes determining whether or not the equipment were bought and delivered; and whether the cost prices were inflated or not.

“This crucial aspect of investigation accounted for why some military officers were handed over to the EFCC for investigation.

“We are also collaborating with anti-corruption agencies in other jurisdictions to determine the validity of such transfers and confirm if the funds were not laundered.
“The EFCC is being painstaking in its investigation to ensure fairness to all suspects under probe.

Continue Reading
You may also like...
Related Topics:dasukigate, military, officers