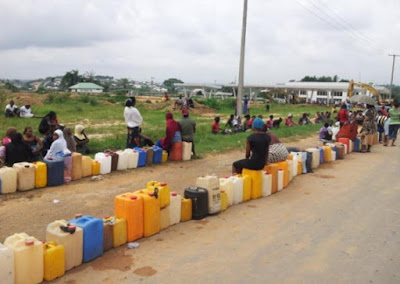 DPR (the Department of Petroleum Resources) in Akwa Ibom, said it had sealed the NNPC mega filling station in Uyo, for allegedly hoarding petrol.

The Controller (Operations) in charge of Akwa Ibom and Cross River, Mr Bassey Nkanga, told NAN in Eket on Sunday that the mega station had amassed the product in its storage tanks, but refused to sell it to members of the public.

Nkanga, however, said that although the state was experiencing shortage of the product, the situation was not peculiar to the area.
He appealed to residents of the state to be patient as government was working hard to redress the problem.

“The fuel scarcity is not experienced only in Akwa Ibom; it is a national problem.
“Yesterday, we got two trucks of the product for Uyo. We are monitoring the sale of the product to see if there will be any illegality,” Nkanga said.

Meanwhile, motorists in the state have continued to express displeasure at situation created by the scarcity of the product.

This is because a litre of the product now sells for between N170 and N200 in Eket and environs and transport fares in the area have increased as a result.