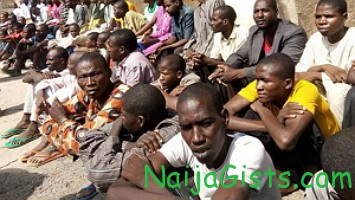 45 Boko Haram members convicted of terrorism have been sentenced to 3-31 years in jail by a Federal High Court in Kainji, Niger state.

This is contained in a statement issued on Friday by the Minister of Information and Culture, Alhaji Lai Mohammed, and signed by his Special Adviser, Mr Segun Adeyemi.

The Minister said that the court decision followed the conclusion of the first phase of the trial of 575 Boko Haram suspects brought before it.

He said the Court discharged 468 suspects who had no case to answer, struck out 34 cases while 28 other suspects were remanded for trial in Abuja and Minna.

Mohammed said that the court ordered that the 468 discharged persons should undergo de-radicalisation and rehabilitation programmes before handing them over to their respective state governments.

The Minister recalled that the trial had commenced with the formal remand of 1,669 suspects for a period of 90 days.

He said that the court had ordered that the suspects be arraigned within the specified period or released unconditionally.