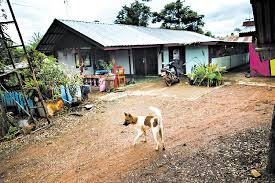 A woman has died hours after she was attacked by an aggressive dog in Idanre LGA of Ondo State.

The victim 55-year-old Florence Aladenoye was rushed to the Federal Medical Centre (FMC), Owo where she died hours later.

The owner of the dog, Olofingbasote Afolabi had been arrested for not taking action to treat the victim.