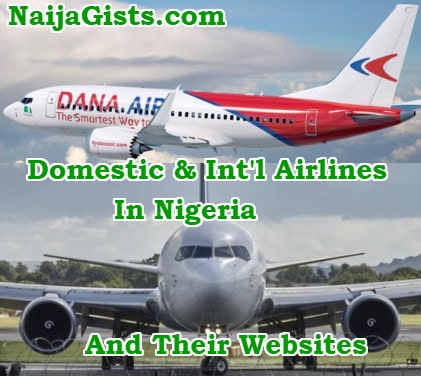 List Of Domestic And International Airlines In Nigeria,Their Websites And Addresses For Flight Bookings

Air travel is presently referred to as the fastest means of commercial transport. The origin of this mode of transportation is credited to the Wright brothers who powered the first air craft in 1903. The success of these brothers in the development of a functional aircraft set the pace for others to build on over time. It has now evolved into a means of moving both humans and cargo over long distances.

A company which provides transportation services for human and cargo by air is referred to as an airline. For an airline to operate they have to possess the necessary government issued clearance. They usually own a number of aircrafts used for transportation.

Nigeria Airways was a company owned by Nigeria and launched in 1958. Prior to this time, Nigeria operated the West African Airways Corporation. It was an airline company jointly owned by Nigeria, Ghana, Sierra Leone, The Gambia and Britain. All other countries withdrew in 1958 as they had established their countries airlines. The West African Airways Corporation was claimed by Nigeria and rebranded into the Nigeria Airways which collapsed in 2003.

Presently the airlines which ply Nigerian routes are either owned by other countries or private individuals. Nigeria does not own an official airline. There is however a recent talk of the revival of the Nigeria Airways by the Nigerian government.

Domestic Airlines In Nigeria, Their Websites & Addresses For Booking

Air peace is an expanding airline company which is fast becoming a top choice for domestic and regional flights. It operates several local schedules per day. On a daily basis, it has flights which go to Enugu, Benin, Uyo, Port-Harcourt, Calabar, Akure, Yola and Owerri. It has two flights to Kano daily. For cities like Lagos and Abuja it has multiple flights per day.

For its regional flights, Air peace has one flight to Dakar, Banjul and Free-Town which only goes on Mondays, Wednesdays, Fridays and Sundays. It has one flight to Accra on a daily basis. Further information about this airline and bookings can be found at the Airlines website www.flyairpeace.com

The company is said to have a total of 22 aircrafts and has a head office at No. 25 Sobo Arobiodu Street, Ikeja Lagos. The office is open between the hours of 9am to 5pm from Monday through to Friday. Via email the company can be reached at info@flyairpeace.com

Arik air is the preferred choice of many for air travels it began operations in 2006. Arik Air is said to have bought the company and structures of the Nigeria Air ways. The airline flies both local and international flights. Its total number of aircrafts is believed to be about 22. Detailed information concerning this company and its online bookings can be found on the Arik website www.arikair.com. For online bookings and flight payments, it is best to play it safe and use only the official website of the airline to avoid the risk of being defrauded. Arik flies locally to Calabar, Bauchi, Asaba, Sokoto, Lagos, Enugu, Uyo, Abuja, Kaduna and basically all the cities in Nigeria which have functioning commercial Airports. It makes regional flights some of which are to Liberia, Ghana and Senegal.

Medview began domestic operations in Nigeria towards the end of 2012 it has a total of 5 aircrafts. Its flights presently operate business and economy class. Flight bookings can be made at the international airports in various cities across Nigeria or at some banks in Nigeria. The official Medview Airline website is www.medviewairline.com

The airline plies routes to Abuja, Enugu, Yola, Lagos and Port-Harcourt several times on a daily basis. The Medview head office is located in Ikeja Lagos State at No.21 Olowu Street, off Mobolaji Bank, Anthony way.

The website of this airline is www.overlandairways.com. The airline flies to Asaba, Bauchi, Abuja, Kastina, Jalingo, Akure, Ilorin, Ibadan, Lagos, Minna and Dutse. It currently operates a fleet of 9 top notch aircrafts. The company began services in 2002.

Overland Airways has offices in major Nigerian cities where it has its flight routes. It also offers air charter services not just within Nigeria but also in the Central and West African regions.

It is an organization which started operating towards the end of 2008 and has since expanded to include 6 routes in Nigeria. Dana Air is reportedly dedicated to providing quick, safe and hospitable services. The company aims to provide the best service possible and give its passengers a pleasant flying experience.

Azman Air is a Nigerian airline which began its flight operation in 2014. It is said to have a network of flights which go to Lagos, Maiduguri, Gombe, Kano, Birnin-Kebbi, Abuja, Sokoto, Port-Harcourt and Kaduna. It operates the business and economy class in its flights. The company can be contacted by email at info@airazman.com or via their website www.airazmin.com. It has a fleet of aircrafts which are 4 in number.

The airline has a lot of history as it has been in existence for decades. Their flight operation covers about 13 cities in Nigeria some of which include Calabar, Lagos, Asaba, Warri, Enugu and Benin. It also makes regional flights to Accra. The airline claims to have the best flying rates for details visit the website www.flyaero.com

It has its head quarters in Lagos at the Murtala Muhammed Airport. Not only does it operate commercial flights it also offers helicopter services as well.

Operations of this airline kicked off in 2011. It focuses its flight routes on Lagos, Abuja and Port-Harcourt and runs two aircrafts. To find out more about this airline and book flights their website is www.flyfirstnation.com

It also makes online bookings at the official website www.maxair.com.ng. Its flight routes are Lagos, Abuja, Kano, Maiduguri, Yola, Port-Harcourt and it flies on all weekdays at very affordable rates. The company also has a mobile app to aid customers in making bookings and keeping up with flight schedules.

Top International Airlines In Nigeria, Their Websites And Addresses For Bookings

Air France is an international airline which has been in existence since 1933. Its routes cover about 150 locations in about 70 countries across the world. Air France has a fleet of 200 aircrafts and still counting and a work force of over 80,000 people. 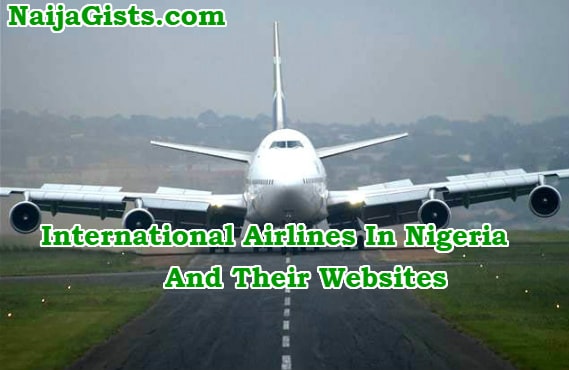 Its flights offer a number of luxurious services at fair rates like reclining massage chairs, access to video screens and more available to its business and economy class passengers. This Airline also travels the routes of several Nigerian cities and makes international flights into as well as from Nigeria. Flights and schedules can be located on the website at www.airfrance.com

As the name implies the company is a British owned airline which kicked off in 1974. It is credited to be one of the biggest international airlines with its routes covering about 70 countries in well over 150 locations. The British Airways has been in operations in Nigeria for over 80 years. It operates first class, business and the economy class and all passengers are entitled to quite a number of privileges. To book flights and make enquiries check out their website at www.britishairways.com

Turkish Airlines plies the flight routes of over 115 countries. It is rich in history as it has been in existence for about 8 decades and is considered as one of the top airlines in the world. Its fleet is said to total about 326 aircrafts and the company has plans of making more additions in the future. The airline operates thousands of flights daily domestic and international; it has a joint work force of over 50,000 employees. It journeys the Nigerian air routes as well; bookings can be done on its website www.turkishairways.com

This airline is the flag carrier of Egypt it has held this position since its establishment in 1932. It has a fleet capacity of about 51 aircrafts and travels to flight destinations in about 75 locations in the various continents of the world. Booking can be made via their website www.egyptair.com and also via their official mobile app available on the airlines site. It makes direct international flights to and from cities in Nigeria like Lagos, Abuja and Kano.

The airline was established in 1993 and was fully the property of the government of Qatari by 2014. It is considered one of the top airlines of the Middle-East. Online booking and check-ins can be made via the official website www.qatarairways.com. It is operational in Nigeria and makes international flights to several countries across the globe.