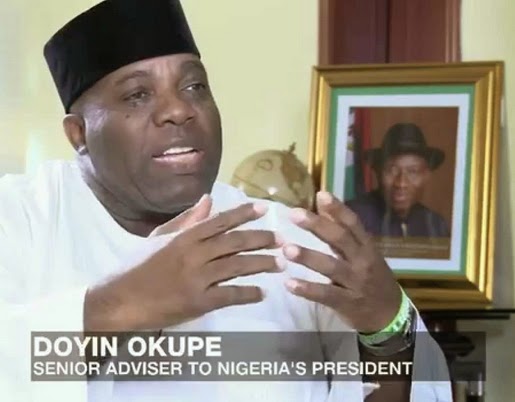 May 12, 2015 – Doyin Okupe Sued By NDIC Over N34Million Debt Loaned From Gulf Bank Of Nigeria

The Nigerian Deposit Insurance Corporation, (NDIC), Liquidator of Gulf bank Nigeria Plc in a debt recovery suit before a Federal High Court in Lagos, against the Senior Special Assistant to President Goodluck Jonathan, Dr. Doyin Okupe and two others filed an application to place the suit on an undefended list.

Joined as Okupe’s co-defendants in the suit are an investment company, Value Trust Investment Limited, and a Director of the company Mr. Ray Ahazie.‬

NDIC is claiming Okupe, who is the chairman of the company and other defendants owe the sum of N34,168,064.51.‬ as outstanding balance of a loan they took from liquidated Gulf bank Plc.

NDIC is also claiming the interest on the said sum at the rate of 21 per cent per annum from May 2007, until the final liquidation of the said sum.‬

NDIC in its statement of claim filed before the court on the 10 July 2007 by its lawyer, Dr. I. Abiodun Layonu, stated that the defendants was granted a credit facility in October 2000, by Gulf Bank Plc, to finance the importation of 10,000 metric tones of rice for onward delivery to the Balyesa state government in the sum of N448, 000.00, vide an offer letter dated 27 October 2000, and that the terms and conditions of the offers and acceptance were later formalized in a memorandum of agreement duly signed and stamped by the bank and defendants.‬

‪The plaintiff stated that in securing the facility granted the defendants, the Balyesa state government through its banker, Society Generale Bank granted a bank guarantee in contract sum of N500 million in favour of Gulf Bank and in further securing the facility, the Investment company’s directors, Dr. Okupe and Ahaze, entered into joint and several guarantee to pay full amount granted in favour of the Gulf Bank. The bank also by way of security has a lien on the shipping documents in respect of the goods financed.‬

‪NDIC further stated that when the ship carrying the 10,000 metric tones of rice arrived Nigerian territorial water on December 28, 2000, it could not berth at Apapa Port until January 03, 2001, because the port was congested and the ship arrived Port Harcourt territorial water July 26, 2001, but refused to berth on the ground that the shipping agency fee $155,000, (about N18.6 million) had not been paid

Upon enquiry, the Nigeria’s representative of the shipping company, Koda International Nigeria Limited, informed Gulf Bank that a bill of $155,000, had been sent to the first defendant, Value Trust Investment Limited, for settlement as per the agreement between the investment company and the Oversea Supplier Luck Rice International. But NDIC stated that it had no knowledge of such agreement on the shipping fee.

‪The plaintiff stated further that Gulf Bank upon further enquiry was informed by Koda International Nigeria Limited that the $155,000, was for port dues, that is, harbour, conservancy and anchorage fees, and after reviewing the Charter Party agreement between Value Trust investment Ltd and Lucky Rice International under “Clause 28″, showed that liability for the payment of shipping fees was actually for Value Trust International, and when it appears that the investment company could not come up with the $155,000 USD, forming the shipping agency fees, Gulf Bank decided to pay the fee to Koda International Nigeria Limited.‬

NDIC further averred that when Balyesa state government reneged on its promise to take the rice, Gulf Bank was forced to commence an open market sale of the rice, before the open market sale of the rice, some of the bags were damaged, culled or lost on board which consequently affected the amount to have been realized from the sales. It stated that the total number of sound bags stood at 196,000; torn bags 2,941,; caked or stained bags 869; public relations bags 105; and leap on board 85 bags.‬

At the end of the sale, Gulf Bank was only able to realize the sum of N454,574,150, in the account resulting in a difference of N70, 425, 850 between the initial overdrawn position of N525 million in Value Trust Investment Limited account, and the difference has been attracting interest since 2001.‬

However the defendants have refused, neglected and failed to liquidate their indebtedness despite repeated demand on same despite the fact that the defendants have admitted owing the aforesaid debt, as this was evidenced in their letter dated February 15, 2006.‬

Consequently, NDIC is claiming the sum of N34,168,064.51, being the agreed outstanding indebtedness of the defendants; and interest on the said sum at the rate of 21 per cent per annum until the final liquidation of the said sum.‬ It also claiming the cost of instituting this legal action.

However when the matter was mentioned the NDIC lawyer Mr Oburume Ayeteno told the court that he has filed an application to place the suit on undefended list which he was ready to argue but Okupe’s lawyer Mr Yemi Gbonegun objected on the ground that he had filed a statement of defence on behalf of the defendants but the statement of defence which the plaintiff had file a reply to cannot be traced in the court’s file, consequently he needed time to reproduce the said statement of the defence.

The presiding judge,Saliu Saidu adjourned till 8th of July 2015, for Mr Gbonegun to regularise his position.