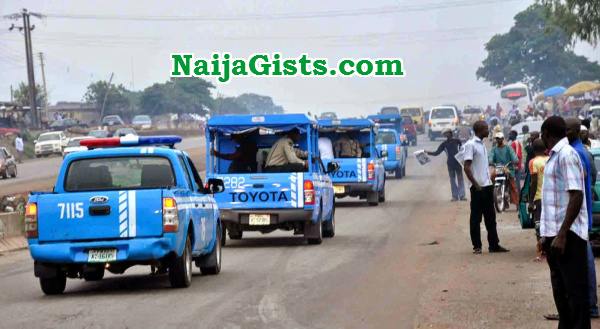 Officials of the Federal Roads Safety Commission (FRSC) and members of the National Union of Road Transport Workers (NURTW) clashed yesterday in Osogbo, the Osun State capital, with many people sustaining various degrees of injuries and seven vehicles destroyed.

We gathered that the fracas broke out when the FRSC officers, led by the Sector Commander, Muhammad Husaini, impounded a vehicle belonging to a member of the NURW during a special patrol along Ibadan Expressway, Osogbo.

Eyewitnesses said the fracas led to destruction of vehicles and accident, which left one member of the NURTW in coma.

Speaking with our correspondent, the Sector Commander of FRSC, Mr. Muhammad Husaini, said the command had impounded 13 vehicles belonging to the members of the NURTW during the patrol, following certain offences, but when one of his officers jumped into one of the impounded vehicles and ordered the driver to drive it to the FRSC office, the latter drove the officer to another destination where other members of the NURTW joined him and beat him to a pulp.

He said: “A bus was impounded in front of our office here and was ordered to be driven to the premises. So, one of my boys entered it. Surprisingly, the driver drove away with the officer . I had to order my men to follow them in order to save our officer that was in the bus. But when they got to Olaiya Junction, they (the NURTW members) mobilised their colleagues and beat up the officer in their bus before they were later brought to our office.”

Husaini explained that the attackers also broke the windscreens of about seven cars in the process, adding:

“They also attacked one of our men with charms before we took him to a native doctor for remedy.”

Husaini noted that two persons had, however, been arrested in connection with the crisis and vowed to deal with whoever was found culpable in the attack.

The secretary of the NURTW, Alhaji AbdulAzeez Najeem, who condemned the attack, said the destruction of the windscreen of the vehicles was not carried out by only his members.

He, however, noted that there had been a rift between some drivers, motorcyclists and the FRSC, which he further disclosed, fuelled the crisis.

He called on the police to establish a thorough investigation into the matter and bring the culprits to order.
“I was at home when I received the call of FRSC Sector Commander, who alleged that our members had attacked his men.

“But when I got here and examined the situation on ground, I discovered that the attack was not carried out by our (NURTW) members alone because I met Road Transport Employers Association (RTEAN) and some motorcyclists, popularly called Okada riders,” he said.

He added: “Also, with what I heard from the sector commander, the boys that came were saying ‘their problem is too much. They would collect money and also impound our vehicle’, (referring to FRSC). So, people that joined in the attack only took advantage of our members.”